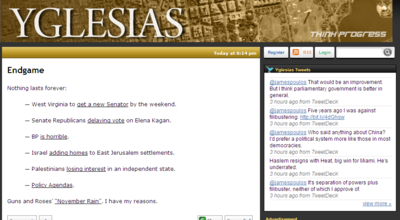 BLOG DESCRIPTION: Matthew Yglesias is a Fellow at the Center for American Progress Action Fund. He holds a BA in Philosophy from Harvard University. His first book, Heads in the Sand, was published in May 2008 by Wiley. Matt has previously worked as an Associate Editor at The Atlantic, a Staff Writer at The American Prospect, and an Associate Editor at Talking Points Memo. His writing has appeared in The New York Times, the Guardian, Slate, The Washington Monthly, and other publications. Matthew has appeared on Fox News and MSNBC, and been a guest on many radio shows.

MY REVIEW: You certianly get your money's worth from this author - he posts several times a day. He's a Liberal, and has interesting talking points. Highly recommended (as long as you read a blog on the opposite side, for balance.) Another author who doesn't really descend to sarcasm, which is refreshing, but some of his views are so wrong. ; )

Sample post
In this post, note that Yglesias accuses the Governor of Arizona of "making up" stories about Phoenix becoming the #2 kidnap capital in the world, etc.... but does not prevent a link to an article which provides the proof that she made this up. While on the other hand there are articles in mainstream media that point this out.

Jan Brewer’s Made-Up Immigration Stories
One thing that’s frustrating to me about the immigration debate is the extent to which it’s driven by sincerely believed, but quite clearly false, factual ideas about immigration and immigrants. Dana Milbank’s latest column is a great exercise in exposing how far the paranoia runs:

The Arizona governor, seemingly determined to repel every last tourist dollar from her pariah state, has sounded a new alarm about border violence. “Our law enforcement agencies have found bodies in the desert either buried or just lying out there that have been beheaded,” she announced on local television. [...] But those in fear of losing parts north of the neckline can relax. There’s not a follicle of evidence to support Brewer’s claim. [...]

Brewer’s mindlessness about headlessness is just one of the immigration falsehoods being spread by Arizona politicians. Border violence on the rise? Phoenix becoming the world’s No. 2 kidnapping capital? Illegal immigrants responsible for most police killings? The majority of those crossing the border are drug mules? All wrong.

The upshot of this is to create a toxic cycle of misinformation. Conservative politicians and media celebrities spread these ideas. Their fans believe them. Then when Dana Milbank or I or anyone else tries to set the record straight, that just goes to show that we’re liberals. So anyone who wants to be seen as credible in conservative circles doesn’t want to take these ideas on. So people become even more entrenched in the view that illegal immigration is causing a plague of violence. Which makes it even harder for anyone to bring some facts to the table.