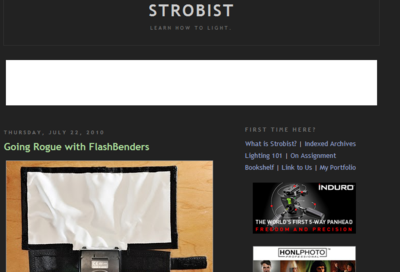 BLOG DESCRIPTION: Strobist is an ongoing, world-wide discussion about photographic lighting techniques. It is the world's number one site for off-camera flash.

MY REVIEW: As an aspiring photographer, and a lover of art, I found this blog fascinating. And if you are the same, you will too. The entries are well-written, informative, and at times, very imaginative!


Sample post:
The many paintings illustrating this entry are not reproduced here.

Beers With: Edward Hopper
It's been a while since we got a chance to chat with any dead artists, and Edward Hopper was actually in the news this month.

So I caught up with him last week at (appropriately) a bar in Fell's Point in Baltimore to chat about the use of light in his most famous work.
__________


Strobist: First of all, Mr. Hopper, I'll confess to being a big fan. You have long been an influence on my lighting. And also for a lot of other photographers, from the look of things.

Hopper: Don't mention it. Really. Influence is one thing, but some of the "homages" are another thing altogether. And please, call me Edward.

Strobist: Thanks. I don't want to waste any time before getting to the painting you are most associated with: "Nighthawks" (1942). It has become a cultural touchstone.

Hopper: Well, that's one way of putting it…

[Ed. Note: Click on the pic to open it bigger in a different window for reference.]

Strobist: So, here's the picture. And I think it is damn-near perfect, if you don't mind my saying. Was that available light?


Strobist: So … it was also staged?


Strobist: And the guys?

Hopper: Locals. They cost me a coupla beers. We did it after hours. We paid the barkeep a C-note to stay late and pose, too. Pretty bootstrapped, really. Fortunately, we did it before that stupid $300 NYC shooting permit crap. Ridiculous.

Hopper: Be my guest.


Strobist: Okay, so everyone has front light, and that can only be coming from one place. Direct light up in the ceiling?


Strobist: Ah, and that would have given you an easy way to use a bare light.

Hopper: Yep, but what all-nite joint wouldn't have caf and decaf?

Hopper: Yep. And that was the only interior light we used. It was an Elinchrom Ranger Quadra, by the way. It kicks out 400 watt-seconds, but was small enough to gaffer-tape the whole damn thing to the ceiling fixture. With a Skyport remote, we could control the power remotely, too. But we ended up running full power. The bounce ate up a lot of light.


Strobist: So, you say that's the only interior light. Were there more?

Hopper: Yes, there is one more strobe -- another Ranger Quadra.


Strobist: Where is it?

Hopper: You tell me.


Strobist: Well, shadows on the right side of the far window point to the light, so I know it is somewhere around that corner.


Strobist: Then it has to be behind the back right wall, on a very high stand ... and a boom?

Hopper: Yep, thus the tiny little Quadra. Head just weighs a few ounces. You can stick it way out there. Stand goes up behind the back right wall, boom comes out to the left, light is hanging out over the street and hidden by the wall over the window. That give me a hair light on Red, and separation on the guy sitting next to her.


Strobist: Is that important?

Hopper: Oh, yeah. Look at the other guy. See how he gets lost against the background on his camera left side?

Hopper: No separation light on him. That kinda makes him secondary to the couple as a subject. That back light is catching the barkeep's face a little, too. But we gobo'd it to keep it from hitting the area across the street directly behind the bar patrons. We left that nice and dark.


Strobist: Sweet. And everything else is ambient?

Hopper: Yeah, about 3-4 stops down. We dragged the shutter for eight seconds -- always bring a good tripod when lighting at night. Had the interior lights off in the bar, so no ghosting issues if they sat still. Ambient-wise, the bar is actually darker than the street outside. But the strobes reverse that.


Strobist: So, do you just wing this kind of stuff, or do you comp it out?

Hopper: Oh, no. I plan everything. Even did a run-thru a few nights before.


Strobist: Really? So you just lay it out on a cocktail napkin, McNally style?

Hopper: Used to, not any more. Now we do nice charcoals, on acid-free paper.

Hopper: Let me explain. Case in point -- see this?


Strobist: The rough draft? Are you kidding?


Strobist: Wow. I use my iPhone to make lighting diagrams.


Strobist: Apparently, not. Let's get back to the idea of the homage.

Strobist: Whatever. So, here is "Boulevard of Broken Dreams II," (1984) by Gottfried Helnwein. Kinda cool, really -- James Dean, Humphrey Bogart, Marilyn Monroe, Elvis. It's cool because they all died before their time, and here they are in a bar together at night.

Hopper: Oh c'mon. It's a watercolor on cardboard, for pete's sake.


Strobist: I have another small confession -- for the longest while, I thought the Broken Dreams painting was the original one.

Hopper: Are you friggin' kidding me? Look. I really gotta go, okay?


Abruptly ended fictional interview aside, this painting was in the news this month. After much painstaking research, it was determined that the bar in Nighthawks -- real tho Hopper made it -- probably never actually existed.

You can read more about that, starting here.

And if you enjoy beers with dead guys, you can read our earlier conversations with Rembrandt and Vermeer