Me and My Kindle (Kindle offerings and news) 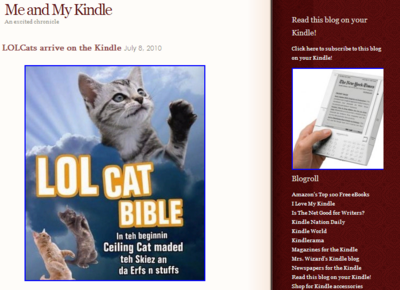 AMAZON SUBSCRIPTION LINK: Me and My Kindle, by DAvid CAssel

BLOG DESCRIPTION: A technology reporter shares how the Kindle is changing the book, reading, libraries, and maybe even ourselves, with well-researched blog posts and odd personal observations about exciting book vs e-book changes already happening today.

MY REVIEW: There are several people blogging about books available on the Kindle. So it all comes down to whether or not you enjoy the writing of the particular individual involved, and if you like the types of books he or she recommends.

I enjoyed Me and My Kindle. The author writes well, which is always a must when you're dealing with a blog reviewing books or other literary offerings! The entries are informative, much more than just a single paragraph. The author gets into the meat of each offering, giving reasons why it should be acquired.

It's annoying that Amazon seems to have settled on $1.99 as a blog price from now on...this blog would sell well at 99 cents a month. For $1.99, I'm not sure. But decide for yourself. After all, for the price of two cups of coffee a month, you can learn about 20 books or so available on the Kindle,and it would be a difficult taste that would be pleased by none of them! (If I may paraphrase Sara Caudwell's Thus Was Adonis Murdered. Sara Caudwell's books are not available on Kindle, more's the pity.)

Anyway, give it a try.

My girlfriend shares her report about a very exciting free ebook…

After watching the movie Charlie Chan on Treasure Island, I’d decided to read the original mystery novels where the detective solves crimes in his calm yet brilliant way. And I’d found all six of the original novels available on the Kindle for just $6.99. Score!

But wait, there’s more… While doing research on the Chan books and their author, Earl Derr Biggers, I discovered that Charlie Chan was created as a deliberate alternative to Chinese supervillains like Dr. Fu-Manchu. I’ve heard about Fu Manchu all my life, but had no real understanding of the character. I knew what his mustache looks like, but that’s about it.

Figuring that my public library wouldn’t have any of the Fu-Manchu books — being as they are not, shall we say, politically correct — I took my search to the Kindle. Lots of Fu-Manchu! So I started with the first book in the series: “The Insidious Dr. Fu-Manchu.”

Arthur Henry Sarsfield Ward (writing under the much more sexy name of Sax Rohmer) created the character of the evil Dr. Fu-Manchu. Sax belonged to the Golden Dawn, a real-life mystical society that combined Masonic rituals with ancient Egyptian Rosacrucion mysticism, along with other ancient mystical writings. Their first temple, which had opened in London in 1888, drew in the young writer and influenced his choice of a pen name — and the first Fu-Manchu stories, which almost drip with mysterious dangers from the Orient. Sax describes Fu-Manchu as “a person tall, lean and feline… a brow like Shakespeare and a face like Satan, a close-shaven skull and long, magnetic eyes of the true cat-green, invest him with all the cruel cunning of the entire Eastern race, accumulated in one giant intellect.”

This fast-paced action novel goes from one dangerous scene to another across London. In general, I enjoy reading novels from different eras, as they immerse you in another time and place, with barely time to rest or take repast — er, eat. But honestly, it was hard to get past the rampant racism of this guy. Sax Rohmer makes sure to mention the danger to the entire white race (italics not mine) with phrases like “the complete destruction of the White Race” and “Yellow Peril.” (You can almost hear the creepy music and dramatic pauses as you read.)

I wondered about the repetitive use of these shocking phrases over and over again, until I found out the story was published in installments from 1912-1913. From one month to the next, Sax wanted to make sure his audience didn’t forget the evil dangers posed by the great Fu Manchu. I was glad to read on Wikipedia that Sax was often attacked, even shortly after the first stories were published, for creating such a blatantly racist character, though he posed as “bemused” at the furor. Instead he defended his novels by saying that the portrait was “fundamentally truthful” because “criminality was often rampant among the Chinese,” especially in the Chinese ghetto of the time.

Sax was very prolific. Wikipedia lists over 50 books and short story compilations, and many of the stories were made into movies. As an interesting aside, Warner Oland, the Swedish actor who played Charlie Chan in the movies until his death in 1938, also played Fu-Manchu in the first three movies.

Ironically, after a lifetime of noxious stories about the mysterious dangers of the Orient, Sax Rohmer died…of the Asian flu.

One Amazon reviewer called it the scariest and eeriest books they had ever read in their life….

RECENT POSTS:
--LOLCats arrive on the Kindle
--The Ghost of Fu-Manchu
--Read the Declaration of Independence on your Kindle
--Free ebooks for the 4th of July
--More Fairy Tales on the Kindle