BLOG DESCRIPTION: Offering daily news and analysis from the Evergreen State and beyond. The Advocate is NPI's unique perspective on world, national, and local politics.

That's the description at Amazon. At the blog itself: Read a Pacific Northwest, liberal perspective on world, national, and local politics. From majestic Redmond, Washington - the Northwest Progressive Institute Advocate.

MY REVIEW: Since I'm a Republican and not a Liberal, obviously I"m diametrically opposed to much of the material on display here. Also, I don't live in Washington state so I don't recognize a lot of the references. However, if you're a Liberal or a Washington Statonian, you'll probably find this blog of great interest.


Dave Reichert, fake environmentalist
Over the last few years, the fine people over at The Seattle Times have scarcely missed an opportunity to try to con Washingtonians (and especially residents of the Eastside) into believing that Republican Dave Reichert is an independent minded guy who thinks for himself and doesn't take marching orders from party bosses.

As readers of The Advocate know, Dave Reichert has a habit of being a lot more honest. At least, when he thinks he's in front of a friendly audience. Nearly four years ago, when Republicans were still in power, Reichert spoke to the Mainstream Republicans at their Cascade Conference, and recounted what he had told a conservative voter who was thinking of voting for the Libertarian candidate:

I wanted to… I wanted to explain to this person how things work a little bit back in Washington D.C. and why certain votes have to be taken.

And so, when the leadership comes to me and says Dave, we need you to take a vote over here because we want to protect you and keep this majority, I... I do it.
You see, it's all about strategy.

I know that the leadership is already planning to protect me… right? They’re going to develop a bill that increases money for education that I can vote on later, and I can come back and say, "I do support teachers." Now, that’s kind of… I mean, that’s the everyday strategic kind of battle that you… that you play out, that plays out, back in Washington, D.C.
I know the leadership is already planning to protect me... wow, that sure sounds like a guy who thinks for himself!

As funny as it was at the time to discover that Reichert didn't know better than not to say such things, it's even more amusing to see that he hasn't learned his lesson. At a recent Republican gathering, Reichert tried to go "off the record" in a roomful of precinct committee officers to explain why he publicly purports to be in favor of environmental protection. Unbeknownst to him, somebody in the room was recording him using a smartphone audio microphone, and that somebody turned over the audio to David Goldstein, who didn't hesitate to transcribe the best parts.

In the clip, Reichert begins his off-the-record chat by asking:

Now, first of all, are there any reporters in the room? Does anybody recognize… are there any people in here that you recognize as strangers? So we know that all of us in here are family, right?
Evidently not.

Uh, I just wanted to be honest with you. You know Jennifer Dunn was an environmentalist, uh, in her votes, too. Uh, she was also pro-choice. I don’t know if most of you remember that now. But, but, if you want to hold on to this district, there are certain, there are certain things that you must, uh, do. This is a 50/50 district.
There are certain things you must do… like pretend to be an environmentalist. With the blessing of Republican Party leadership, who don't want to lose a key suburban district, one of the few blue districts to still be represented by an R.

I only have two to three percent to play with, every two years, and I have to raise three to four million dollars to stay in, to do it. I am a 90/10. 90 to 10, if you look at my votes. All the TARP votes are no, all the stimulus package votes are no, the health care I’ve been no all three times.
In four sentences, Reichert has managed to thoroughly vindicate every critical analysis we've offered of his voting record during the past five years.

The Sheriff goes on to explain that the whole point of embracing wilderness conservation is to neutralize Washington's environmental movement.

Wild Sky was a done deal. It was already in its process. It had been worked on for eight years before I even came to Congress. Jennifer Dunn endorsed Wild Sky, and I followed in her footsteps per her advice.

[...] So, uh, you know, it, it, it, was it was a good vote. It was a good move on my part to do that. … Because I’ve only, I’ve, supported Wild Sky, I’ve supported Alpine Lakes, because of the reasons that I just laid out to you. They are… what I’ve done is taken out I’ve taken them out of the game in this district. They’re out.
And by they, Reichert was no doubt thinking of the Washington Conservation Voters board members who recently co-hosted a fundraiser for his reelection campaign. Reichert's got them on his side, even though the League of Conservation Voters (the national equivalent of WCV) gave Reichert a D on its most recent report card. Last time I checked, a D was a failing grade.

But for some reason, a few influential environmental leaders have convinced themselves that they and their organizations can't appear to be aligned exclusively with one party, so they've chosen to embrace what they consider to be the best of the Republican incumbents. They're allowing themselves to be played.

Considering that Republicans are in the minority and have fewer incumbents to defend, the environmental community would do well to invest as heavily as it can in Democratic challengers who have the best chance of taking out Republican incumbents, so that Republicans are forced to play more defense and can't go on offense as much. It's good strategy. Let's face it: nothing about the Republican Party is remotely progressive anymore. Republicans have to answer to their rabid right wing base. That's what Dave Reichert was doing when he was caught on tape.

If Republicans take back control of Congress, the environment will be threatened even more than it already is.

Why should Washington Conservation Voters, the Sierra Club's Cascade Chapter, or any other local environmental organization settle for Dave Reichert when they can have Suzan DelBene? DelBene happens to actually believe in environmental protection because protection is part of her moral system. She's authentic.

Dave Reichert is not authentic. Dave Reichert — the politician — is a fake. He's not who he appears to be. He doesn't think for himself. He's admitted when cameras were rolling that he does what he's told; that's what he's best at. He is fortunate to have a great staff and a newspaper publisher working on his behalf to make sure his unintentional honesty doesn't do him any damage.

If Reichert were an independent thinker, his record and his own behind closed doors conversation with party faithful wouldn't contradict what he told a room full of Washingtonians in town for Barack Obama's inauguration in January 2009: that he was "on board" with the President's new direction for the country.

I was one of the people in that room, and though I attempted to give Reichert the benefit of the doubt when I wrote up what he said (I was in a very forgiving mood at the time) I didn't seriously expect that Reichert would back up his words with action. It didn't take long for my suspicion to be confirmed.

Since Dave Reichert is only honest in front of Republicans, it'll probably be up to Suzan DelBene's campaign to enlighten the rest of his constituents that Reichert votes in lockstep with Republican leadership ninety percent of the time... by his own reckoning! … and that his efforts to protect the Alpine Lakes and Pratt River Valley are just a facade to keep environmental groups "out of the game".

Never realized I hadn't posted in over 2 weeks!

Things have just gotten away from me the last week and a half...posting should be back on schedule starting this weekend.
No comments: 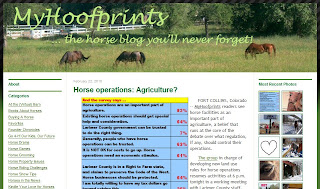 BLOG DESCRIPTION: Get a horse fix on your Kindle! For horse lovers and horse owners alike. Hoofprints will take you to the real world of horses, their people and their dreams!


MY REVIEW: A blog that covers everything horse related from feeding horses to handling manure to exercising to local politics concerning stables to equine health and more. One of the more interesting features is following the release of the blogger's first book, a teen horse novel, titled, Winning Bet. The blog is interesting, informational, and personal.

It is well written with pictures in most posts. It does suffer from my usual complaint infrequent and inconsistent postings. Sometimes she posts two days in succession, sometimes it will be a week between posts or more. I feel certain her readers would be happy with more.


________________________
Ann Currie publishes My Life a Bit South of Normalwww.abitsouthofnormal.com/
and also, Silver Pieces: The Strange and Peculiarstrangeandpeculiarsilver.blogspot.com/ 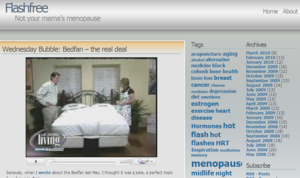 BLOG DESCRIPTION: An organic, fresh, informative, hip and humorous overview of evidence-based alternative approaches to menopause and the transition to midlife.

MY REVIEW: A blog that covers complimentary/interpretive medicine dealing with menopause. She has recently added a doctor as a guest contributor. Her posts cover new studies related to women's health, nutrition, interviews, and other topics - all geared toward that mid-life transition we all face. Her posts are thorough with many links to past posts and outside sources and a helpful review of all the posts at the end of each month. She posts often, several times a week.

It is well written, however, I didn't see the "hip or humorous" part but that may be up to each reader. It's an informative blog on an important subject. For those interested in this topic, this is a good blog.

Wednesday’s Bubble: easy does it with Chamomile
Don’t put all your eggs in one basket
Osteoporosis: what’s the 411?
Wednesday’s Bubble: another nail in the coffin of HRT
West meets East, Guest Post Jonathan Black MD/MPH Student
________________________
Ann Currie publishes My Life a Bit South of Normalwww.abitsouthofnormal.com/
and also, Silver Pieces: The Strange and Peculiarstrangeandpeculiarsilver.blogspot.com/
No comments: