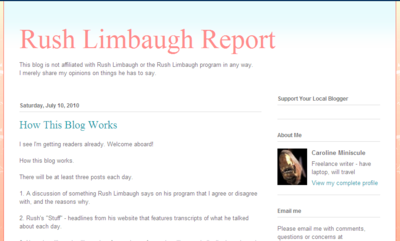 BLOG DESCRIPTION: I'm a Republican. I'm also an atheist, a feminist, pro-gay rights, pro-animal rights, pro abortion. But I support the Republican ideals of American exceptionalism, of standing on your own two feet. In this blog, I use the Rush Limbaugh program as a launch pad to discuss my own views on the day's events.

MY REVIEW: A brand new blog, only a couple of days old. The author shares news headlines from various media, then talks about politics...or at least, is going to do so starting this coming Monday.

She writes well, she has definite opinions. Check it out.

Saturday, July 10, 2010
Limbaugh's Immigration Rules
The Rush Limbaugh program runs, in my neighborhood, from 12 noon to 3 pm Monday through Friday. I won't bother with the Sunday "Best of Rush" which is really only a repeat of a program held during the week.

Although I've listened to the Rush Limbaugh program for a few years now, I'm going to use this blog "going forward" and won't dwell too much on past events unless a reason arises to do so.

I will share Limbaugh's "Rules of Immigration," however, because they reveal the hypocrisy of Mexico and the terrible constraints that the American government and people are living under in an attempt to stop illegal immigration (as opposed to legal immigration!)

Limbaugh reads out a list of precepts....that make a lot of sense actually...and then reveals that they are actually the Immigration Laws of Mexico! Yes, folks, Mexico deports more illegal aliens than the USA des! And yet when Arizona enacts a law which will enable that state to enact Federal law (which the Feds refuse to do), President Calderon starts screaming racism. Apparently its okay for Mexicans to toss other Middle American and South American people out of their country, but when Americans do it, it's racism.

And the mainstream media doesn't point out this little bit of hypocrisy. Astonishing.