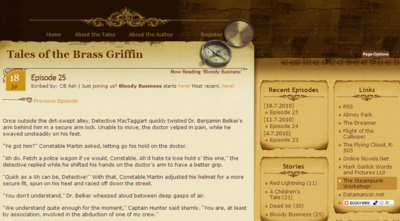 BLOG DESCRIPTION: In a time that Might-Have-Been but Never Was, steam power and clockwork mechanisms commanded the might of science and harnessed nature. Fantastic creatures were common, myths were truth and airships crossed the skies. This is the story of one of those airships.

MY REVIEW: My first introduction to the Steampunk genre was many years ago, when Michael Praed starred as Phileas Fogg in The Secret Adventures of Jules Verne TV series. Sadly, the show only lasted a season or so. Anyway, the whole point of steampunk is that instead of high-tech computers as a motive force, all the mechanical devices - robots, mo-hole drillers, etc. are run on steam. (Of course that's a simplification.)

Anyway, several books from this series are available on the Kindle, or you can subscribe to their blog and get a cliffhanger delivered daily.

Once outside the dirt-swept alley, Detective MacTaggart quickly twisted Dr. Benjamin Belker’s arm behind him in a secure arm lock. Unable to move, the doctor yelped in pain, while he swayed unsteadily on his feet.

“Ye got him?” Constable Martin asked, letting go his hold on the doctor.

“Ah do. Fetch a police wagon if ye would, Constable. Ah’d hate ta lose hold o’ this one,” the detective replied while he shifted his hands on the doctor’s arm to have a better grip.

“Quick as a Ah can be, Detective!” With that, Constable Martin adjusted his helmet for a more secure fit, spun on his heel and raced off down the street.

“We understand quite enough for the moment,” Captain Hunter said sternly. “You are, at least by association, involved in the abduction of one of my crew.”

“And we want ‘im back!” Moira snarled.

Rodney looked from Captain Hunter to Moira, then to Detective MacTaggart. He cleared his throat, “Hm, please?”

Moira, standing next to Rodney, jabbed him in the ribs with an elbow. “We’re not askin’ him out ta tea, y’know.”

The young inventor gave her a pained look, blushing from embarrassment, “Well … there’s no reason to be impolite.”

Meanwhile, Dr. Belker, seemingly unaware, sobbed despairingly, “I can’t! None of you understand! It’s not my fault. I had no choice! I have no control over any of this!”

“Ah be doubtin’ that,” Detective MacTaggart replied grimly. “Although, we’ll be findin’ out quite soon enough just how much at fault ye be.” He then hesitated a moment before he continued, “Though, if ye are willin’ ta tell us who ye accomplices are, this could be goin’ easier.”

Hunter glanced up and down the street a moment beyond the knots of gawkers that had gathered, curious if the carriage was nearby. He saw plenty of horse-drawn carriages, but none with the familiar black box-like shape unique to the constabulary.

When it steadfastly refused to appear, he leveled a hard gaze onto Dr. Belker. “As your carriage has yet to arrive, please enlighten us, Doctor. I, for one, am riveted with curiosity to know the details.”

Dr. Belker twisted in the Detective’s tight grip to look at Anthony. “My family, it’s my family! They threatened myself and my family. You must believe me! I never thought it would all come to this. It was only two, and it was to validate a mainspring for artificial limbs! Harmless work! I never knew it would come to this! They blackmailed me … ” Overcome with a mix of exhaustion and emotion, he sagged in Detective MacTaggart’s grip, sobbing gently.

“Talk straight, damn ye,” the detective growled, his patience thin due to the beating he had received earlier in the day. “Who are ‘they’? Just what did ye do, man?”

Dr. Belker shook his head sadly. “I don’t know who they all are. By the Queen’s mercy, if I did I would surely confess it.”

He took a deep breath to steady his voice then continued, “I bought two bodies some time back.”

“The law’s clear on the matter of buyin’ corpses, Doctor,” MacTaggart said sternly.

Dr. Belker nodded glumly, “I know, Detective. I needed to validate the fine adjustments to the new prosthetics I was working with. They were to support and strengthen a snapped spine, like dock workers who’d been caught in a CASS accident.” The doctor stared fitfully at the ground, “Yet I am not going to just experiment on the living. That would be monstrous.”

“An’ buyin’ corpses is the saintly thing ta do?” Moira snapped.

The doctor ignored her barb and pressed on, “I heard a rumor – gossip among colleagues – that one merely need to leave money at a certain location with a note or a card containing the address where the bodies should be delivered.”

He paused again, taking another slow breath to steady the quiver in his voice, then continued, “I did so, heaven forgive me. Two bodies were delivered as agreed. I finished my tests and buried the corpses myself, around Greyfriars near the Coventers’ graves. I can show you where, I still clearly remember it. I thought that the end of it, but then the Irishmen started visiting me at odd hours.”

“Irishmen? What about these Irishmen?” Hunter asked curiously. “Do you have their names? Did they visit more than once?”

“One goes by ‘Liam’, the other ‘Conor’,” Dr. Belker replied woefully, “They visited dutifully, once a week. Always with a new request from their ‘doctor’, who I think kept them on retainer. First, it was a few medical supplies, then a few spare rolls of bandages – nothing that would be missed. Later it was medicine, then suddenly came bodies that I was ordered to hide.” The doctor shook his head as if the memory were painful. “I knew, I could tell, that they had been … ” His words trailed off.

“Murdered?” Moira offered, her voice icy and brittle with anger.

Dr. Belker nodded glumly. “It was hard to tell, but that first young lady … the faint bruises on her neck. There was no mistaking that they were hand prints. I nearly missed them at first, but once I did see them … they leered out at me, daring me to keep others from knowing about them.”

A thought nagged furiously at Captain Hunter’s mind, “Why did you help us, then? Why give us the logbook, if it puts your family in peril?”

“I can’t go on anymore,” the doctor said sadly. “I can’t, I see them in my sleep. Their eyes … accusing me … always accusing me.” He looked over at Moira, then at Hunter. “I thought, perhaps, with Thorias here, he would help. That my family would be helped before those beasts got to them.”

“The Irishmen,” she whispered back curtly. She then addressed the doctor, the edge of a snarl apparent in her voice. “Who keeps sendin’ them louts to ya?”

Dr. Belker shook his head, “I don’t know. It’s a doctor, that’s all I know. Someone skilled. That much I could tell by the way they were … dealt with.” He closed his eyes as if to purge the memory. “Examine the bodies for yourselves, and you will see it square off!” He opened his eyes, looked at Moira, then Rodney and Hunter. “Help my family! They’ll come for them now. Please, I beg you! My children are little, my wife doesn’t know.”

At the top of the hill, the black police Brougham carriage jostled into view, its polished brass electric arc lanterns shining brightly alongside the top edge of the carriage roof. A blue leather and brass servitor, shaped like a clockwork owl, clung tight to one of the brass rails next to the coachman. Beside both clockwork servitor and coachman on the raised driver’s bench sat Constable Martin, his face set with a grim, determined look.

At the sound of the horses, Dr. Belker struggled madly, so much that Detective MacTaggart had to shake the man into submission.

“Enough o’ that now! Stop it!” The detective roared. “I’ll send the lads ’round to keep ye family safe. Ye’ve me word on it!”

However, Belker did not seem to hear the detective. His breath rasped in his throat, coming quick as if he was suffocating.

“What have I done? What have I done? My family! They’ll be killed!” The doctor raved, slipping into hysterics, and quite nearly ripping free from Detective MacTaggart’s grip. “I have to save them! Yes, yes … I’ll spirit them away!”