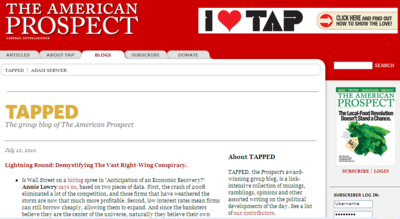 BLOG DESCRIPTION: TAPPED, the Prospect's award-winning group blog, is a link-intensive collection of musings, ramblings, opinions and other assorted writing on the political developments of the day.

MY REVIEW: This is another blog that gives you your money's worth. Multiple posts a day, from different authors - all of whom seem to be Democrats or Liberals. Very interesting to read their take on certain subjects (I've heard no outrage over what goes on in Brownsville, Brooklyn, in fact I'd never heard of Brownsville Brooklyn til I read an article about it on this blog, and I was surprised to see the author didn't even mention that this "could be" what is going to happen in Arizona...


The New York Times has a great story about police officers using the stop, question, and frisk tactic in Brownsville, Brooklyn -- one of the many areas designated an "impact zone" under commissioner Ray Kelly. Those zones are flooded with police officers, often new recruits, who reinforce small quality-of-life crimes like having an open alcohol container in public and questioning folks who appear to be loitering on the street in an effort to prevent bigger, more violent crimes. The department is pretty open about the point, too: If they arrest someone for something as mundane as jumping a turnstile in the subway, or for blocking pedestrians on the sidewalk (which is one of the shadier subsections of the disorderly conduct statute), then officers can search them incident to a lawful arrest and find out if they have a weapon. The same is true if officers begin questioning someone and can articulate a reasonable suspicion that they have a weapon. Making "furtive movements" was one of the most commonly cited reasons for a frisk.


Obviously this must be a procedure on the Brownsville police department's part to keep the citizens safe...why is their no outrage over this? Presumably because Brownsville has no illegal aliens? [And after further research I see that articles about this practice by the police are just now appearing in papers like the New York Times.]


Shifting the Balance From the Senate.

Ruth Marcus writes today that President Obama's decision to install Donald Berwick by recess appointment was "outrageous." By her lights, a recess appointment is "the last step in cases of egregious delay," and Obama should have gone through the normal confirmation process before taking this option.

Marcus, like others, doesn't seem to understand that the Senate has seen a tremendous change in norms, beginning with the 104th Congress and continuing into the present. Whereas previous Senates were mostly deferential to the president's nominees, these Senates -- and particularly the current one -- have taken to routinely opposing nominees, regardless of the position's importance or the candidate's actual acceptability. This is key; when there is a clear policy reason for a filibuster -- for instance, the nominee's ideology is objectionable to the critical vote in a filibuster -- the president can still meet his goals by offering a similar but less objectionable nominee. But when obstruction is routine, and there's no point at which the president can meet the preferences of an objecting senator without sacrificing his goals, then it doesn't make any sense for a president to bother with the confirmation process.

Instead of chastising President Obama for circumventing the confirmation process, critics of this recess appointment should direct their fire at the Senate. By refusing to confirm hundreds of unobjectionable nominees, Senate Republicans have drastically tilted the balance of power in their direction, forcing the president to rely on his other powers. The more Republicans refuse to confirm the president's nominees, the more he'll appoint them during recess. As I've said before, I think this is a good thing; not only does it allow the president to pursue his policy choices -- as is his prerogative -- but in the absence of Senate reform, it can push the minority into greater cooperation. By cutting them out of the process, President Obama will force Senate Republicans to choose between some input and none, pushing them to yield on all but the most controversial nominees.
-- Jamelle Bouie


RECENT POSTS:
--Lightning Round: Demystifying The Vast Right-Wing Conspiracy
--McCain Worship Never Dies.
--The Little Picture: Progressive What?
--The Trouble With Tech Reporting.
--Preparing for a Scandal-Happy 112th Congress.
--Forget the Truth, Give Me the Spin!
--Stop-and-Frisk State.