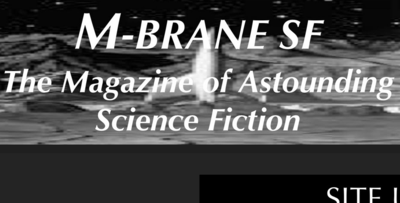 MY REVIEW: I really enjoyed this blog, and anyone who is an SF writer wanting to break into the [paying] business, or even SF fans, will find this blog of interest. It give sthe inner workings of publishing an SF magazine, as well as a lot of other stuff, whatever's in the fertile mind of the author.

Sample post:
The author is a man after my own heart. I too have books I've owned for 30 years and never read. I keep them and move them with me, just because some day, I might be in the mood to do so.

The Ruins of Earth

I haven't been reporting on personal reading or making book recommendations a lot in recent months. My reading time has been so scattered among so many different things, including reading lots of unpublished stuff for projects that I am editing, that it's been hard to keep track of it all. I have, however, been taking in a good deal of short fiction that I have had sitting on the home library shelves for a long, long time but never made it to previously. I recently noticed this gem, sitting long-ignored on a lower shelf, The Ruins of Earth, "an anthology of stories of the immediate future" edited by Thomas Disch back in 1970.

Considering that within a month or two, M-Brane Press will probably be announcing the publication date and table of contents for Rick Novy's 2020 Visions (also an anthology of stories of the immediate future), I thought it would be interesting to see what another editor had pulled together forty years ago around a similar concept. But while our forthcoming book is intended to present an array of possibilities about a very specific year, Disch's book is themed very much around ecological catastrophe and the assumption that such is coming in one form or another (a concern familiar to people now, and which perhaps feels more imminent). He organized the book into four sections titled, "The Way it Is," ""Why the Way it Is," "How it Could Get Worse," and finally, most pessimistically, "Unfortunate Solutions."

I have not read all of the stories in the book yet, so I won't comment on them, but what makes me consider this book something of a gem is its remarkable table of contents. Lesser-known works such as Kurt Vonnegut's "Deer in the Works" and Fritz Leiber's "America the Beautiful" and Gene Wolfe's "Three Million Square Miles" are combined with well-known items like Daphne du Maurier's "The Birds" (the basis for the eponymous film by Hitchcock) and Harry Harrison's "Roommates" (the seed for his novel Make Room! Make Room! which was the basis for the film Soylent Green) and Philip K. Dick's "Autofac." I chose as the first item to read (last night, as I fell inevitably asleep on the couch), J.G. Ballard's "The Cage of Sand." Though I haven't finished it yet (sleep, you know), as I started reading it I felt myself settle comfortably into one of Ballard's uncomfortable worlds. This one starts with someone in a hotel building which is evidently getting overtaken floor-by-floor by drifting sand, and it has the flavor of one of his 1960s catastrophe stories, The Drowned World or The Wind From Nowhere, both of which I like a lot.

A book like this is the answer that I wish I could give to the various people over the years (looking at you, Jeff!) who sigh and wonder why it is that I ever need to buy another book and why we must move from home to home cases and cases of books that I may never read again and which I may never have read in the first place. I bought The Ruins of Earth as one of a thick stack of books that I lucked into at a thrift shop about 12 years ago. It still has a fifty-cent Goodwill price tag on its cover. Did I need it right then? Probably not. And it did sit for over a decade, and moved to several new homes, untouched except to pack it into a box and then unpack it to put it back on its shelf. Until last night, when I was looking for just the right thing to read before sleep time, and I saw it on the shelf and said, "Hmm. What's this one about anyway?" And that's why I bought it all those years ago.