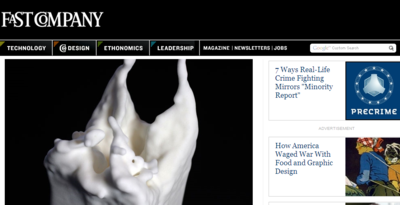 MY REVIEW: This is a fascinating blog, which I enjoyed very much. Businesspeople will enjoy this blog a great deal. There are profiles of business people, and profiles of technology and companies.

Steven Spielberg's Minority Report wowed audiences with its futuristic tech: flashy hand-gesture computers, flex-screen displays, holograms, and Lexus-designed auto-piloted vehicles. The sci-fi flick also showed the world a dystopian, draconian picture of a crime-free society: "precogs" predicting murders, eye-scanners dotting the streets and subways, a jet-pack-toting police force, and a public seemingly deprived of any right to privacy. Spielberg envisioned this for 2054, but advances in technology are bringing that future sooner and sooner. Here's a look at some of our own sci-fi crime fighting tools.

2. Facebook
There's no escaping the system when we've all voluntarily tapped into it. With Facebook having some 500 million registered users, the social network is quickly becoming a powerful source of data for the police, who can scan profiles for suspect clues. Only this week, law enforcement used Facebook to nab a murder suspect through photos posted on his page. Witnesses were able to independently ID the alleged killer using these pictures alone, which the city police chief called "ironclad" evidence. And this isn't the first time. In 2009, an escaped criminal used Facebook to taunt police while on the lamb, posting pictures of himself flaunting his freedom--before he was soon caught.

3. Google Maps
Internet crime updates such as Gothamist's incident map now allow the public to track the police blotter next-to-real-time. But it's not just concerned citizens and nosy neighbors who are plugging into Google's mapping tech. Google Earth has given law enforcement access to satellite imagery, enabling them to track down criminals from the sky. In Sweden, for example, police were able to zoom down close enough to discover a two-acre marijuana plantation, leading to the arrest of 16 perps and the seizure of 1.2 tons of pot. Drug-sniffing dogs are now a thing of the past.

4. OnStar
In the film, all vehicles are auto-piloted along tracks and can be controlled by law enforcement. When scanners detect a wanted criminal entering a car, police can automatically pull the vehicle over. Looks like this directly inspired OnStar's Stolen Vehicle Slowdown technology. The system enables customers and police to locate a stolen car using GPS, depower the vehicle, and watch as it glides to safety along the side of the road, ending any chance for a high speed chase. Did I mention OnStar even force-locks the doors until police can arrive?

5. Scanners, Everywhere
The days of comical-disguises are numbered for Boris and Natasha, who will have to figure out another way to get past airport security. New facial recognition scanners such as the one installed last year in London enable airport security to measure "points on a person's face and compare them with [their] digital passport photograph." Of course, law enforcement isn't only tracking you by air. Automatic number plate recognition technology is becoming more ubiquitous, allowing police to monitor you real-time, even when they're not looking.

6. Drones
A bill circling the House of Representatives aims to legalize unmanned aerial vehicles to fly over domestic skies for enhanced border security and oil pipeline monitoring. British units are already using UAVs to keep watch of its citizens, which would perhaps raise more questions over privacy violations if London wasn't already chock-full of CCTV cams.

7. Mii? Easily the best Minority Report-like tool, however, comes courtesy of Nintendo. In Japan, police searching for a hit-and-run suspect put up wanted posters around town, but they didn't have the perp's photograph. Instead, they just used his Mii image. So if you happen to run into him at the Wii resort, be sure to alert the proper authorities. (On second thought, this could just be awesome viral marketing.)

RECENT POSTS:
--7 Ways Real-Life Crime Fighting Mirrors "Minority Report"
--How America Waged War With Food and Graphic Design
--Exclusive: "Urbanized" Is the Third Film in Gary Hustwit's Design Trilogy
--Jamba Juice to McDonald's: You Selling Smoothies is Just as Crazy as Us Blending Cheeseburgers
--How Oakland's Walmart-ization of Weed Could Choke Out Small-Time Growers
--Salton Sea Could Be Source of Lithium Riches for the U.S.