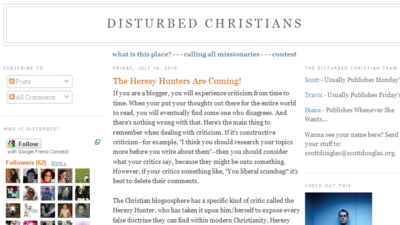 BLOG DESCRIPTION: Disturbed Christians was created as a place to tell stories about ways that religion has wronged people; more importantly it is a place for sarcasm, humor, and anecdotal true accounts of when faith and culture collide. We practice love, not Christianity. And redemption? Yeah, I guess we’ll have to drag our feet and include a bit of that too—we are Christians after all—but I promise it won’t be preachy or anything like that, because nothing makes a blog blow more than people telling you that you can go to heaven.

As an atheist, I find reading these blogs pretty interesting, but I know that actual Christians will also find what they have to say of interest.

The Heresy Hunters Are Coming! [half of it!]

If you are a blogger, you will experience criticism from time to time. When your put your thoughts out there for the entire world to read, you will eventually find some one who disagrees. And there's nothing wrong with that. Here's the main thing to remember when dealing with criticism. If it's constructive criticism--for example, "I think you should research your topics more before you write about them"--then you should consider what your critics say, because they might be onto something. However, if your critics something like, "You liberal scumbag!" it's best to delete their comments.

The Christian blogsosphere has a specific kind of critic called the Heresy Hunter, who has taken it upon him/herself to expose every false doctrine they can find within modern Christianity. Heresy Hunters see themselves as modern day Reformers pitted in a battle against the corrupt Church. Sometimes they accurately find false doctrines that a lot of Christians accept, like the Prosperity Gospel and the Word-of-Faith movement. However, sometimes the Heresy Hunters forget about 2 Timothy 2:24-25: "The Lord's servant must not quarrel; instead, he must be kind to everyone, able to teach, not resentful. Those who oppose him he must gently instruct, in the hope that God will grant them repentance leading them to a knowledge of the truth." (Emphasis mine) When the Heresy Hunters get on a roll, they often resort to name-calling and finger-pointing.