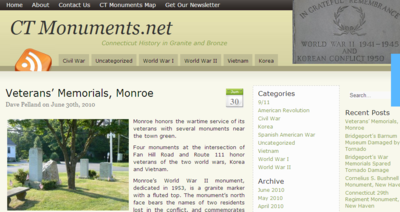 BLOG DESCRIPTION: A three-times-a-week blog highlighting Connecticut's historic monuments and the events that inspired them

MY REVIEW: I absolutely recommend this blog, for the history buff as well as the tourist. If you're going to Connecticut, one of the smallest but historic states in the Union, you'll want to read up on what you'll be seeing, and this blog explains the monuments to you.

How many times have you walked along a road, passing by some statue or other and having no idea what it means or why you should care? Too few people do care, but those statues and monuments are just as much a part of history as the museums and buildings that you walk by.

Veterans’ Memorials, Monroe
Dave Pelland on June 30th, 2010
Monroe honors the wartime service of its veterans with several monuments near the town green.

Four monuments at the intersection of Fan Hill Road and Route 111 honor veterans of the two world wars, Korea and Vietnam.

Monroe’s World War II monument, dedicated in 1953, is a granite marker with a fluted top. The monument’s north face bears the names of two residents lost in the conflict, and commemorates all residents who served.

A boulder honoring World War I veterans, dedicated in 1931, stands immediately behind the World War II monument. A plaque on the monument’s south face bears the dedication “In grateful recognition of the valor and devotion of the young men of this community who served in the world war for liberty and justice 1914-1919.” The plaque lists 24 names, and indicates that two were killed in the war.

A short distance away, a granite flagpole base in front of Monroe’s municipal center further honors the town’s veterans. The monument’s left wing bears a dedication reading, “To all of those veterans from the town of Monroe who served their country: Honor. Hope. Remembrance. Gratitude. Peace and eternal rest.”

The monument’s right wing lists the nation’s wars and honors those who have made the supreme sacrifice, including one resident lost in the current Iraq conflict.

On the south side of the Monroe green, a 2008 monument commemorates the 1781 encampment of French cavalry forces commanded by the duc de Lauzunon.