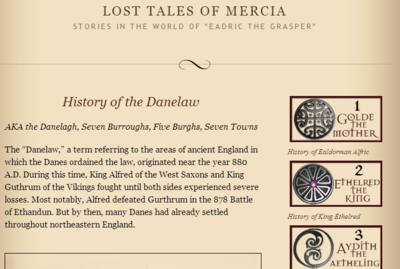 BLOG DESCRIPTION: “The Lost Tales of Mercia” is a series of ten short stories set in England near the end of the Viking Age. Though fictional, they are heavily researched and feature many real historical figures as described in the ancient texts of the “Anglo-Saxon Chronicles.” They are intended to portray what might have and could have happened. These quick reads will entertain and educate at the same time. Read the stories in any order; though interconnected, they do not follow each other chronologically, and each tale stands alone.

The stories will be released every other Tuesday until October 5th. On that day the full book, "Eadric the Grasper," releases on amazon.com.
MY REVIEW: I love historical novels, and this is an excellent one. Well-researched and well written. Cost for the blog is only $1.99 a month (the cost of a cup of coffee at Starbucks!) and for that you get a complete novel without having to wait until October.

Since you get a 2-week free subscription to decide if you like it, why not check it out and see what you think of the writing and the story?

History of the Danelaw

The “Danelaw,” a term referring to the areas of ancient England in which the Danes ordained the law, originated near the year 880 A.D. During this time, King Alfred of the West Saxons and King Guthrum of the Vikings fought until both sides experienced severe losses. Most notably, Alfred defeated Gurthrum in the 878 Battle of Ethandun. But by then, many Danes had already settled throughout northeastern England.

The two Kings attempted to reach some semblance of peace with another. The Anglo-Saxon Chronicle states in its entry for 880 A.D.: “This year went the army from Cirencester into East-Anglia, where they settled, and divided the land.” The year the actual treaty took place is a matter of debate, but Kevin Crossley-Holland states it thus:

“… after he had beaten them at Edington, Alfred seems to have regained the initiative to such a degree that the Danes decided to make peace with him. As part of the new understanding between Alfred and Guthrum, the leader of the Danes agreed to be christened. In 886, the two men drew up a momentous treaty dividing England into two parts – Wessex and Danelaw.”