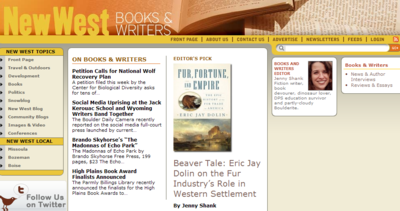 BLOG DESCRIPTION: Named the "Best Literary Blog" in Westword's Best of Denver 2008 issue, NewWest.Net/Books includes reviews, interviews, news, and features about books and writers of the American West, with an emphasis on the literary writers of the Rocky Mountain region.

MY REVIEW: This blog has a lot of different material. There are comments on politics, on the environment, on literary festivals, and so on, as well as lots of in-depths book reviews.

The Echo Park neighborhood of Los Angeles is a fount of artistic inspiration. It’s the setting for dozens of movies (including the fine 2006 indie film “Quinceañera"), the subject of several songs (including Joseph Arthur’s lovely “Echo Park"), and the muse for many writers such as mystery novelist Roger L. Simon, poet Charles Bukowski, and now Brando Skyhorse, whose admirable debut novel, The Madonnas of Echo Park, is a gritty, heartfelt tribute to the neighborhood where he grew up.

Echo Park has produced so much art and pop culture perhaps because it is a crossroads where the histories of very different sorts of people overlap. Silent-era movie stars populated Echo Park, and then it became a middle-class enclave until the white flight to the suburbs began in the ‘50s. Then it turned into a predominantly Mexican-American neighborhood that had a high-crime period during the ‘80s, which Skyhorse depicts. Over the past decade, Echo Park has gentrified, with gay men being some of the first white people to purchase and rehab old houses. It’s a narrative that is common in many cities throughout the West: a long-time Hispanic neighborhood suddenly becoming prized real estate, as is the case with the Highlands area in north Denver, for example.

Skyhorse focuses primarily on the Mexican-American residents of Echo Park, but deftly keeps all eras of the neighborhood’s history alive at once in The Madonnas of Echo Park, with flashes of former movie star glamour in the bullet-grazed façades of once-grand old houses, and pictures of Hollywood stars hung in a Mexican-American girl’s bedroom. Skyhorse’s characters reference music videos and movies that were filmed in the neighborhood, usually in ironic juxtaposition to some grave act of violence that went down later in the same location.

The Madonnas of Echo Park tells the stories of the people who ride the bus in the most car-dominated city in America, revealing forgotten lives taking place every day in the background of those of the more rich and powerful. As one character describes his status, “We slipped into this country like thieves, onto the land that was once ours.”

The novel is structured out of a collection of interconnected stories. Each chapter has different first-person narrators who are sometimes only tangentially related to one another, but they all live or work in Echo Park and share certain touchstones. The book opens with an Author’s Note that reads like Skyhorse’s memoir of a controversy in his elementary school classroom during the 1980’s. According to the book’s publicity materials, it’s fiction.

The Author’s Note introduces the character Aurora Esperanza, who leaves Skyhorse’s school and is raised by her mother Felicia alone after her father, who narrates the first regular chapter, has an affair and leaves them. Felicia, who speaks little English, cleans houses in the Hollywood Hills, and Aurora translates for her and seeks her own identity, which she finds, in part, through her worship of the singer Morrissey.

Aurora and Felicia were briefly famous in the ‘80s when they participated in a mother-daughter dance party in front of a store featured in Madonna’s “Borderline” video. The girls and their mothers—dressed up like Madonna in “acid-washed skirts, see-through mesh tank tops, traffic cone orange spandex tights, aquamarine ankle-high socks, tangerine pumps” and “shiny silver crucifixes"—pose for a picture, and one of them is killed in a drive-by shooting a split second later. Some claim that a certain immaterial girl appeared in the photo: the Virgin Mary, who turns up in one of the novel’s many touches of magic.

The novel revisits this moment many times, but the plot isn’t the most salient aspect of The Madonnas of Echo Park. It’s gripping primarily because of its authentic details—such as its depiction of a day in the life of a Mexican day laborer, a bus driver, a cleaning lady, or a convict fresh out of prison—and its unusual characters, such as a confident young woman named Duchess with a flair for fashion who ends up losing steam in her twenties, fails to graduate from college, and works in a bank before meeting a sad fate.

One of the most striking voices is that of Efren Mendoza, a bus driver who accidentally incites a race riot between Mexicans and blacks. In his chapter, he lays out the geography of his route, noting where it’s safe for Mexicans to exit his bus and where it’s not, and vents his anger at illegal immigrants, whom he believes give a bad name to Mexican-Americans like himself. “How can you turn against your own kind? They say. But they aren’t my kind. They’re not Americans. They’re illegals, and the benefits to law-abiding Americans like me outweigh whatever inconveniences these people face breaking our laws.”

Skyhorse isn’t afraid to show his characters at their worst, and his propensity for exploring how just about every one of them is at least a little bit racist makes The Madonnas of Echo Park a bracing read.