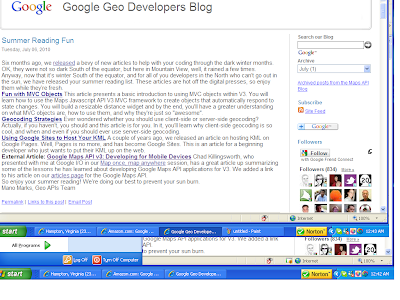 BLOG DESCRIPTION: News and notes from the Geo Developers team.

MY REVIEW: If you're a Google mapper, or are interested in how Google mapping works, you'll be interested in this blog. I admit it was over my head. There are a few caveats. It's only updated once a week or so, and occasionally there are a lot of links in the text, and its a hassle to access them, whereas if you read the blog on the web, it's easy.

Nevertheless, check it out.

Last year, we launched the Google Qualified JS Maps Developer Program. This qualification, and your inclusion in the directory, will help interested parties contract with you for their geo development projects. Hot on the heels of the Maps API V3 graduation we are now announcing an update to the program which now includes JS Maps API V3 Developer Qualification. What does this entail, exactly?

The Google Qualified Developer program uses a version release and points threshold strategy rather than setting an absolute term on earned qualifications. Instead of picking an arbitrary duration such as one year, developers have the opportunity to continuously earn points towards their qualification by resubmitting assignments and assisting with exam updates and testing.

Current JS Maps API developers earned a minimum of 3000 out of a possible 5000 points in order to become qualified. To earn these points, they submitted practical evidence of their programming capabilities by writing applications, demonstrated their commitment to the developer community, supplied professional references, and passed the JS Maps API Exam.

Now that JS Maps V3 has been released, the developers who did not participate in early testing have been notified of potential points expiration. Developers will have 30 days to take the new V3 exam, and submit new applications using the V3 API. To read more about the program, take a look at our site. We look forward to expanding our API support and growing the Developer Qualification program. Please reach out to us with questions and feedback at devqual-proctors@google.com.