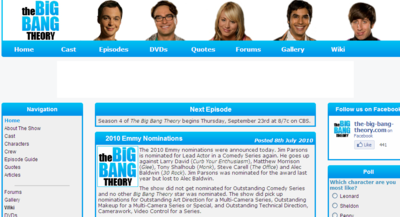 BLOG DESCRIPTION: A fan site for the hit CBS sitcom The Big Bang Theory. Get the latest news, ratings, episode descriptions and more delivered to your Kindle.

MY REVIEW: Wa-ell, I give this blog a YES, because it translates well to the Kindle, but as for any other reason to subscribe to it...not so much. I'm a big fan of the Big Bang Theory (indeed, I've written a bit of fiction, available at Fanfiction.net: http://www.fanfiction.net/s/6067580/1/The_Mirror_Image_Iterations (in which Raj and Howard sell the idea for a sitcom to Wil Wheaton, which features 4 beautiful phsycists who have trouble getting men because their brains scare them away. And Penny is cast as one of the leads. Sheldon has a double whammy...Penny as a physicist and Wil Wheaton as a writer for a sitcom about physicists????)

But the blog is as dry as dust. It's not someone's personal blog about the show, their reactions to episodes, etc., but rather just news - the actors have been nominated for Emmys, box art is revealed, dull stuff like that.

However, the website itself is worth visiting. There are screen caps, quotes, a Wiki...stuff that should be put into the blog, IMHO...

Perhaps there will be more interesting stuff posted in the blog once the next season starts - it's scheduled for September, two months away!