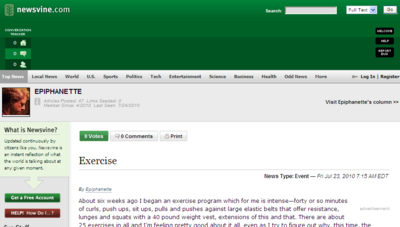 MY REVIEW: I was unable to find the home page for this blog, although I could find individual entries. (Not sure if itIf you want to check it out, just subscribe to it. If you don't like what you see, unsubscribe within two weeks and you won't be charged.

Anway, it's an interesting blog. The author would seem to be a recovering alcoholic in AA, a reporter, or former reporter for the Washington Post, refers to himself as a Franco-American (not sure if he does that as a subtle dig at those people who insist on hyphenating themselves when we are all Americans, or if he really does think that it's important to identify himself as of French heritage.)

Anyway, it's a pretty interesting blog, especially for those people with drinking problems who need to know that they can recover.

For most of my adult life, I’ve lived alone. It’s a test, a blessing, too often a curse, always a challenge. Telling others my situation elicits one of two reactions. From women, there’s a hint of pity and consternation. Living alone at my age is seen as somewhat of a shortcoming, implying a lack of something or other—a man unable to commit? Perhaps found wanting? Or guilty of unforgivable infractions? Were I recently divorced or widowed, the feminine reaction might be something different, but my divorce was finalized almost 15 years ago, and I no longer have excuses.

My male friends have different reactions. Many are envious, equating my present with their youths when they were single, childless men with few responsibilities other than planning their Friday nights. Many think I have a life far more active than it really is and I don’t disabuse them.

I’ve mastered most household chores from doing the laundry to waxing the floors. I can iron a shirt, shine shoes, sew a button, mend a hole in jeans, change a vacuum bag. I cook adequately, take care of the yard, house and cars, pay all the bills on time, take the cat to the vet when necessary. I’m somewhat lax about the content of my freezer—there are items there from 2008, but hey, isn’t that what freezing is for?—but by and large I run a tight ship. More than one person has said I would make an excellent, old-fashioned wife.

The major problem, of course, is that it gets lonely at times. My house is often quiet; I rarely play any of the 400-or-so CDs I have. The phone weighs a thousand pounds, and I don’t like admitting to loneliness. I prefer to call it solitude. Still, it’s too easy to isolate, to refuse invitations under one pretext or another, thinking that when I am by myself, at least I’m in good company. And that, of course, is not necessarily true. Within addiction circles, it’s often said that a mind may be a terrible thing to waste, but it can also be very dangerous territory, a neighborhood unsafe to travel alone.

I have rituals based on the days of the week. I exercise, write, compose songs, shop, cook, eat. I go to 12-step meetings. At times, these are often the only contact I might have with others and when that feels OK, I know I’m in trouble. Lately, isolation has felt OK too many times. I’ll make the necessary changes because one of the boons of recovery is a nascent awareness of what is good or not good for me. I don’t necessarily abide by this knowledge, but at least it is there.

Which means at this time, I should go to a meeting.