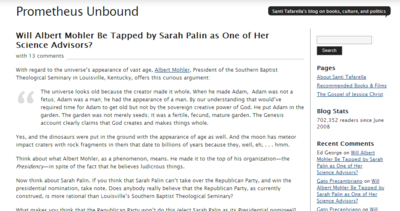 BLOG DESCRIPTION: Santi Tafarella teaches writing and literature at a college in California, and his blog offers daily reflections on books, culture, and politics.

MY REVIEW: Prometheus, for anyone who may not know, was a demi-god who stole fire from heaven and gave it to mankind. Zeus was so angry that he tied Prometheus to a rock, and sent a vulture to eat his liver every day. Every night, the liver would grow back, so that for eternity Prometheus would be suffering that torment.

(I can't remember from what book I read it...but there's a line from a poem that has always stuck with me: "The rock, the vulture and the chain, all that the proud can feel of pain."

Then there's the poem from Lord Byron (about Napoleon, actually):

"Or, like the thief of fire from heaven,
Wilt thou withstand the shock?
And share with him- the unforgiven-
His vulture and his rock?" )

Well, now that I've demonstrated that I have some slight knowledge of the classics, on to the review. I enjoyed this blog, for all that I don't think I'd approve of the author's politics. He seems to support Obama! (On the other hand, he has no brief with Sara Palin, and I must agree with him there. She's too much of an opportunist for my taste. And if Obama has taught us anyting, it's that we don't want someone with no experience running the White House!)

Anyway, this blog is well written, and you get a lot of bang for your buck. Each entry is practically an essay, well thought out and well presented.

Will Albert Mohler Be Tapped by Sarah Palin as One of Her Science Advisors?With regard to the universe’s appearance of vast age, Albert Mohler, President of the Southern Baptist Theological Seminary in Louisville, Kentucky, offers this curious argument:

The universe looks old because the creator made it whole. When he made Adam, Adam was not a fetus; Adam was a man; he had the appearance of a man. By our understanding that would’ve required time for Adam to get old but not by the sovereign creative power of God. He put Adam in the garden. The garden was not merely seeds; it was a fertile, fecund, mature garden. The Genesis account clearly claims that God creates and makes things whole.
Yes, and the dinosaurs were put in the ground with the appearance of age as well. And the moon has meteor impact craters with rock fragments in them that date to billions of years because they, well, eh, . . . hmm.

Think about what Albert Mohler, as a phenomenon, means. He made it to the top of his organization—the Presidency—in spite of the fact that he believes ludicrous things.

As the economy fails to turn around, and the Republican Party becomes ever more beholden to its Albert Mohlers and Sarah Palins, a Sarah Palin presidency with young earth creationist science advisors is becoming ever more plausible, isn’t it?

RECENT POSTS:
--Donor 45: Talk about Speeding up Evolution!
--David Wolpe Succinctly Explains the New Atheist Moment
--Will Albert Mohler Be Tapped by Sarah Palin as One of Her Science Advisors?
--A Cyber-Pearl Harbor?
--In 1935, Were Cary Grant and Randolf Scott Sex Partners? No, But These Images Look Rather Camp

And thanks to Google, I was able to find the source of the rock, vulture chain quote. It is also from a poem by Byron:

1 Titan! to whose immortal eyes

2 The sufferings of mortality,

3 Seen in their sad reality,

4 Were not as things that gods despise;

5 What was thy pity's recompense?

6 A silent suffering, and intense;

7 The rock, the vulture, and the chain,

8 All that the proud can feel of pain,

9 The agony they do not show,

10 The suffocating sense of woe,

11 Which speaks but in its loneliness,

12 And then is jealous lest the sky

13 Should have a listener, nor will sigh

14 Until its voice is echoless.

15 Titan! to thee the strife was given

16 Between the suffering and the will,

17 Which torture where they cannot kill;

18 And the inexorable Heaven,

19 And the deaf tyranny of Fate,

20 The ruling principle of Hate,

21 Which for its pleasure doth create

22 The things it may annihilate,

23 Refus'd thee even the boon to die:

25 Was thine--and thou hast borne it well.

26 All that the Thunderer wrung from thee

27 Was but the menace which flung back

28 On him the torments of thy rack;

29 The fate thou didst so well foresee,

30 But would not to appease him tell;

31 And in thy Silence was his Sentence,

32 And in his Soul a vain repentance,

33 And evil dread so ill dissembled,

34 That in his hand the lightnings trembled.

35 Thy Godlike crime was to be kind,

36 To render with thy precepts less

37 The sum of human wretchedness,

38 And strengthen Man with his own mind;

39 But baffled as thou wert from high,

40 Still in thy patient energy,

41 In the endurance, and repulse

43 Which Earth and Heaven could not convulse,

44 A mighty lesson we inherit:

46 To Mortals of their fate and force;

48 A troubled stream from a pure source;

49 And Man in portions can foresee

50 His own funereal destiny;

51 His wretchedness, and his resistance,

52 And his sad unallied existence:

53 To which his Spirit may oppose

56 Which even in torture can descry

58 Triumphant where it dares defy,

59 And making Death a Victory.