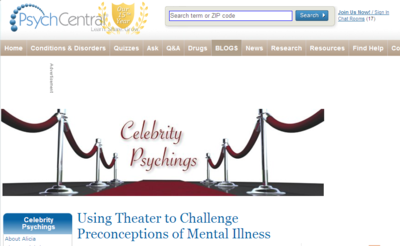 MY REVIEW: Celebrities may have mental health issues just like us...I'd say they have more problems, because they are never-endingly in the spotlight. Female actresses develop eating disorders and obsessions with facelifts, and know that no matter what they do, someone is going to criticize them simultaneously for being too fat or too thin, too old (at 40!) and so on. I'd say male actors have it a helluva lot easier, but even they can have issues, over and above just what the ills that flesh (and mind) are heir to.

So this is a really interesting blog about psychology, and I'd think it'd be of interest to everybody. There's no salaciousness, no delight in the pain and agony of people with "too much money," just honest insight into people's problems.

The person I’m talking about is Marie R., who is for all intents and purposes an anonymous reader and commenter who used a recent Entertainment Weekly update to share her thoughts on Mel Gibson’s behavior and our reactions:

You aren’t far off. I truly believe he has been mentally ill his entire adult life, probably had at least some treatment to control his symptoms, bipolar most likely, & some other borderline personality disorders, but that as he has gotten older, & I’ve had some personal experience with this, people begin to disintegrate, especially if their treatment isn’t consistent & medications retooled over the years as needed. He seems to be self-medicating now which can be nothing but bad. Also, if anyone here knows about what was going on with Rita Hayworth in her later years, just before they finally figured out she had Alzheimer’s, she was drinking heavily, prone to fits of rage, breaking things, etc., sounds a lot like what’s going on with Mel. I don’t know, not a shrink or a neurologist, but he surely needs one or both now, for himself & his children. They must be humiliated & scared at this point. Mel needs a PET scan, pronto. And if I’m off the mark then he needs to go to jail, but my money’s on mental illness, or something even worse that cannot be fixed. And if that’s the case, he deserves our compassion, not our contempt.

I suppose the reason I’m sharing this comment is to point to an example of calm contemplation in this whirlwind of outrage and shun. It is possible to pause for a minute and think about the situation – think about why Mel Gibson (and anyone else, for that matter) has done these things.

The verbal abuse and threats were bad, yes. The physical violence was bad, too (if there was any – there’s now speculation as to whether Gibson actually hit Oksana Grigorieva in the mouth, as she claimed, or if that all plays into the extortion theory).

But even amidst all that, it is possible to eventually set aside the inevitable shock and confusion and anger and evaluate the situation.

If indeed Mel Gibson is suffering from untreated mental illness, which would be better: Hoping he seeks (and benefits from) professional help, or writing him off as a lunatic lost cause?

If it were you, how would you hope your family and friends would react?


RECENT POSTS:
--Using Theater to Challenge Preconceptions of Mental Illness
--Finding the Value in Celebrity Psychiatrists
--When We'd Show Mel Gibson Compassion, Not Contempt
--Ryan Bingham: Sadness, Happiness, and Songwriting as Therapy
--Mel Gibson Might Have Toppled Over the Edge of Darkness
--Does Crystal Bowersox's New Smile Mean New Confidence?
--Ron Artest Thanks Psychiatrist After Lakers Take NBA Championship
--Are Psychiatrists Better Off Behind the Scenes?
--Cut Yourself Some Slack: Lessons From Jewel
--Get Reacquainted With Megan Jackson and EmsCharityKiss