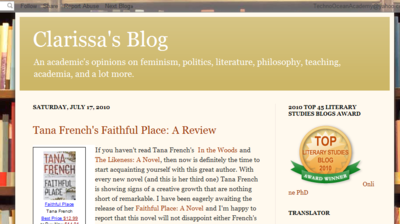 MY REVIEW: The sample post below is typical of the posts here at this blog - well thought out, insightful, and full of information. The author writes well, and is mosts definitely a feminist. We dont' agree on all points - her politics are the opposite of mine, I think, nevertheless I enjoy her writing very much.

I'm not sure if her name is Clarissa, however. There's a rather famous novel by Virginia Wolfe, with Clarissa as the eponymous character, and I have a hunch that's why this author chose the name.

Anyway - an excellent blog for women - and guys too, of course.

Susan J. Douglas's Enlightened Sexism: A Review
Susan J. Douglas's Enlightened Sexism: The Seductive Message that Feminism's Work Is Done made a dubious impression on me. On the one hand, it offers an intelligent and well-written analysis of the gains feminism made in the past 2 decades and of the different forms the backlash against these feminist achievements took. The main strategy that the patriarchal system uses today to combat feminism, says Douglas, consists of convincing us that feminism has already achieved everything and for this reason is not needed any more.

In spite of these interesting points Douglas makes in her book, I found Enlightened Sexism to be very unconvincing in many respects. One of them was the tired insistence (so enjoyed by many feminists) on the debasing nature of shows like Girls Gone Wild. In their endless criticisms of such shows, Douglas and Co demonstrate how deeply ingrained patriarchal stereotypes are even in the minds of feminists. Douglas apparently believes that baring her breasts in public is demeaning to a woman. Nobody ever suggests, however, that men are debased by revealing their body parts. This is a consequence of the old patriarchal stereotype that sees women as "sullied" by sexual activity.*

Douglas keeps criticizing shows like Bachelor, where women humiliate themselves by competing for the affections of some dumb guy. She forgets, however, that there are also shows like Bachelorette, where men make idiots out of themselves by competing for the attention of a woman. And how about that show where geeky, unattractive, socially awkward men had to compete for women with a group of muscular, super popular, tall, and extremely attractive guys? Reality TV humiliates men and women equally, that's the way it works.

In a similar way, Douglas criticizes entertainment products such as Buffy, Zena, Lara Croft and others that present female warriors who are at the same time thin and gorgeous. True, but movies and shows about male heroes also star super attractive and incredibly ripped main characters who are similarly expected to strut around half naked most of the time.

I wish Douglas were honest enough to recognize that anti-feminist backlash cannot possibly be 100% manufactured by some mysterious and all-powerful forces that manipulate women into something they are nor aware of. I said it before but I need to say it again. What feminism has to do right now is recognize that the patriarchal system brings a lot of suffering as well as many benefits to both men and women. The kind of feminist analysis that presents women as constant victims of men and/or 'society' is outdated. More than any other cultural phenomenon, including the enlightened sexism Douglas talks about, this reluctance to include both men and women among beneficiaries and victims of the patriarchy is what has brought feminism into a dead-end.

In spite of these objections, I am not in the least sorry I read Enlightened Sexism. Douglas writes extremely well and some chapters of the book (especially the one where she makes fun of the incredibly stupid Men Are from Mars, Women Are from Venus: The Classic Guide to Understanding the Opposite Sex) are beyond hilarious. Douglas talks about the overwhelming sexism of shows like Ally McBeal***, and even though she finds some non-existent "nuanced range of attitudes and opinions about women's place" in this sexist piece of humiliating drivel, still her analysis is always fun to read.

* Douglas betrays the extremely uneasy relationship she has with her own sexuality when she echoes Wanda Sykes's dream of a detachable vagina. Life would be so easy if women could leave their vaginas at home when going out, she agrees. For one, this would supposedly protect women from rape. In a strange moment of feminist blindness, Douglas never realizes that a) this would not protect women from being raped orally or anally and b) keeping a female vagina at home, under a lock and key, symbolizes the patriarchal attitude of sexuality like nothing else. Seeing public space as a locus of permanent danger for women is also hardly very feminist. Women get raped not because they have vaginas (which they fail to leave at home, thereby deserving whatever happens to them) but because rapists choose to violate them. I understand that Douglas and Sykes make this point in jest, but even so the fantasy of detachable vaginas sounds disturbing.

** Only last night I was watching Last Comic Standing. A very geeky looking skinny male comic came on stage and started his joke by saying: "So my girlfriend told me..." And the audience erupted in laughter without letting him complete the joke. While there is obviously no reason why he couldn't have a girlfriend or be hugely popular with women, the audience was demonstrating with its laughter that the way he looks and talks is a reflection on his masculinity (or, rather, its lack).

*** When I first moved to North America 12 years ago, I was eagerly expecting to encounter some sort of a feminist nirvana on this continent. The image of the US and Canada as places where feminist values had won a definitive and resounding victory was an important part of what I thought I knew about this continent. And then I saw Ally McBeal. In my entire life, I hadn't seen a show that would be quite as degrading to women. I was curling my toes in shame all the time I was watching it. I kept expecting a punch line but it never came. It was horrifying to realize that I ended up living in a place where it was considered possible - and even funny - to present women as this needy, stupid, desperate, and pathetic. Later on, I would feel equally humiliated by the image of pathetic women on Sex and the City.

RECENT POSTS:
--Tana French's Faithful Place: A Review
--Gone With the Wind? Not quite!
--Inception: A Feminist Review
--How Many Times Can Obama Sell Out Women?
--New York Times Keeps Kissing Bankers' Asses
--You Go Argentina!
--What is Your Writing Style Like?
--Blogging Award
--Women as Furniture
--Iniesta's Goal in World Cup Finals (Spain - Nether...