Paul Krugman: The Conscience of a Liberal (politics) 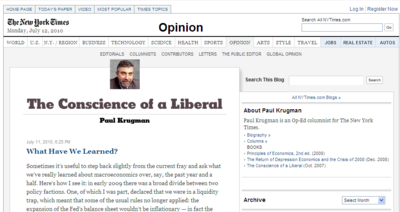 AMAZON SUBSCRIPTION LINK: Paul Krugman: The Conscience of a Liberal by The New York Times Co, by Paul Krugman

BLOG DESCRIPTION: Paul Krugman is an Op-Ed columnist for The New York Times. Mr. Krugman is the author or editor of 20 books and more than 200 papers in professional journals and edited volumes. His professional reputation rests largely on work in international trade and finance; he is one of the founders of the "new trade theory," a major rethinking of the theory of international trade

MY REVIEW: I heartily recommend this blog. He's a liberal, but he seems to present a balanced side to all this issues (although believing that the Republicans are in the wrong, of course.) He's also refreshingly free from all the sarcasm that seems to permeate most political blogs these days (and radio programs! I'm a Limbaugh fan but some of his schticks do grate.)

(In a sample post of his below, I chose the one where he is calling for a new stimulus plan, saying that the first one was too small! Let us not forget that half of the "stimulus" money hasn't been spent yet. According to Limbaugh, it's going to be used in 2011 to help Dems with their campaigning....

So you definitely get two sides of every issue if you read this blog, and either listen to Limbaugh or read a right wing blog.

What Went Wrong?
The Obama administration is in a difficult spot. It’s now obvious that the stimulus was much too small; yet there’s virtually no chance of getting additional measures out of Congress. The administration has chosen to deal with this by trying to have it both ways — condemning Republicans, rightly, for obstructionism, while at the same time claiming, falsely, that we’re still on the right track.

How did things end up this way? We’ll never know whether the administration could have passed a bigger plan; we do know that it didn’t try.

Now, I don’t have any inside information on what really happened; I do talk to WH economists, but they don’t offer — and I don’t ask for — any information on internal wrangling. But based on public reporting, like the Ryan Lizza article on Larry Summers — which reads rather differently now that we know how things are really working out, or more accurately not working out — it looks as if top advisers convinced themselves that even in the absence of stimulus the slump would be nasty, brutish, but not too long. That’s the assumption embedded in the now infamous Romer-Bernstein chart, above. So all policy needed to do was meliorate the worst, while we waited for the economy to recover spontaneously. From the Lizza article:

Summers did not include Romer’s $1.2-trillion projection. The memo argued that the stimulus should not be used to fill the entire output gap; rather, it was “an insurance package against catastrophic failure.”

I don’t know why Summers etc. believed this. Even before the severity of the financial crisis was fully apparent, the recent history of recessions suggested that the jobs picture would continue to worsen long after the recession was technically over. And by the winter of 2008-2009, it was obvious that this was the Big One — which, if the aftermath of previous major crises was any guide, would be followed by multiple years of high unemployment.

Those concerns were what had me fairly frantic in early 2009: I was terribly afraid that the failure of an inadequate stimulus to bring unemployment down would end up being seen as a refutation of the whole idea of stimulus — which is exactly what happened. And by the way, the reason I was for temporary bank nationalization was that it would make it possible to recapitalize banks quickly, and get them lending, which would help make up for the weak stimulus; what happened instead, of course, was gradual recapitalization through profits, with banks not doing much lending along the way.

And here we are. From a strictly economic point of view, we could still fix this: a second big stimulus, plus much more aggressive Fed policy. But politically, we’re stuck: even if the Democrats hold the House in November, they won’t have the votes to do anything major.

RECENT POSTS:
--What Have We Learned? Never forget that as far as the facts go, the Keynesians won this hands down.
--The Revenge of Felipe II - Take that, you heretical Dutchmen.
--Lacking All Conviction - What is the Obama team thinking?
--Trending Toward Deflation - Are we there yet? Almost, by some measures.
--Get Him To The Greek - I have nothing more to say that's fit to print.