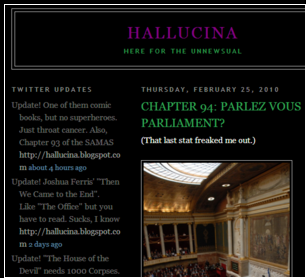 MY REVIEW: Difficult to know what to make of this blog. He's summarizing chapters from the Super Abridged Marie Antoinette Saga (SAMAS), and I'm assuming he has decided to make a movie out of it (in his mind) and cast various actors such as Kevin Spacey and Keira Knightly in the roles.

It's intriguing. Amusing. Well worth a look.

Ever since the departure of M. De Choiseul, the French Parliaments have been jumpy... jumpy with the Jumprope of Intrigue, which can easily turn into the Whip of Punishment. Typically, the Whip is about to lash out at the Duke D'Aiguillon (Kevin Spacey), since the King has just nominated him to the command of the cavalry. The Parliaments converge, deliberate and come up with the decision to "investigate the suspicious conduct of the ex-governor of Brittany." But this is just idle frothing; what's needed is a public outcry to ruin D'Aiguillon. In these way-back, no Internet days, there is a surefire way to make the people rally toward scandal:
A funny-ass song.

While the composers get busy working on a slanderous ditty, the Parliaments print out 10,000 copies of their announcement to investigate D'Aiguillon, and comissioners will soon be sent to the hotel where he is now staying. D'Aiguillon is NOT expecting the visit: as a matter of fact, he's preparing to do some visiting of his own, to his uncle, the Duke de Richelieu (Jack Nicholson).

With the help of his cunning assistant Rafte (Michael Caine), Richelieu has let the rumor fly around that he turned down a Ministry so as not to owe anything to Madame Dubarry- so now D'Aiguillon looks like Madame Dubarry's lackey, and Richelieu has seen a surge in popularity since his unlinking from the King's mistress.
The Marshal's saturnine smile masks actual hurt: he'd been working for that Ministry, and to have it stolen by his snot-nosed nephew is an insult that requires revenge.

Stitches is a memoir about the wounds our parents unwittingly inflict on us, about how the horrors of childhood dictate the errors of adulthood. A fusion of Alison Bechdel's Fun Home and David B.'s Epileptic, Small's graphic novel is raw, the sort of memoir one could only write after most of its characters are dead- and forgiven. The son of a Michigan doctor and his sullen, unloving wife, Small was subjected throughout his childhood to "curative" X-Ray showers, which eventually left him with a cancerous growth from his neck, a series of operations, and the loss of his voice.

The wonder is that even as he takes us down the Alice-in-Wonderland sink-hole of disease, he manages to leave us with hope: that he's an artist, and sane, and making these particular confessions- that makes this book the greatest of survival stories. Go read now.