I first reviewed this blog way back in Feb so by rights it should be a retro review... but in Feb this blog and my reviewing style were just finding their feet, and I really didn't do a very good job of reviewing it so I'm going to do it again. It therefore counts as a new review! 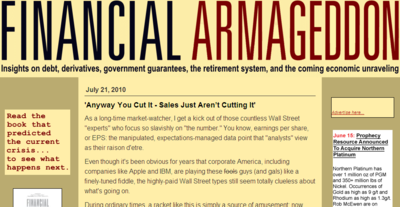 My review: This blog is found in the Business and Investing category. It provides a gloomy view of investing, and it's a must read.

The posts are detailed and informative, and written by someone (Michael Panzner) in the business, who knows whereof he speaks.

If you're thinking of putting your hard-earned money into the investment markets, or of pulling it out of the markets, this is the blog to read.