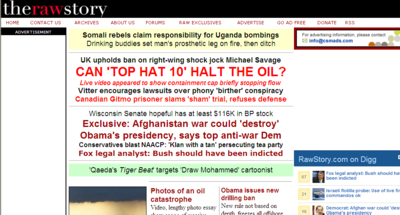 MY REVIEW: Another website and blog on the left side of the aisle (Democrat and Liberal). Multiple posts per day - of all kinds of news, not just political - well written and interesting to read. Recommended.

Sample post:
My own opinion -- BP has "dared" to cut back on payments to claimants who didn't fill out their claim forms adequately. But, I thought Obama had removed BP from the equation? They had to give their money to Obama's task force, and it is the US government that is responsible for handing out money. In addition, let us not forget that in every disaster of this magnitude, seems like the scammers are out in force and usually billions of dollars are wasted on these scammers. Is BP - assuming it is BP and not the US government - to be faulted for trying to make sure only legitimate vicitms are compensated? Is BP to be faulted for expecting claimants to be able to fill out their forms correctly?


BP plans to reduce payments to some 40,000 oil-spill claimants, potentially making life more difficult for individuals and businesses affected by the Gulf oil spill, a Louisiana official has said.

The Associated Press reports that Louisiana's secretary for children and family services, Kristy Nichols, found "a significant cut in daily payments" during a recent review of claims against BP, which appears to be related to incomplete forms.

In a letter to Ken Feinberg, the federal administrator of the oil spill claims process, Nichols wrote that it was "rash" of BP to cut payments to 40,000 of the 99,000 claims filed so far.

It is rash for BP to make this decision without consulting the State to determine if there are alternative methods for obtaining the documentation in State records. If not quickly rectified, the direct impact will be devastating to individuals surviving financially month-to-month. This action is irresponsible and in complete contrast to BP's repeated promise that they will "make things right." BP has negatively impacted these people's livelihoods as a result of the oil spill and has not kept pace with their needs.

Nichols suggested that BP use government records, such as those held by the Louisiana Department of Wildlife and Fisheries, to fill in missing information. She argued that claimants often don't have access to the information required on the claim forms.

"When the State asked BP how many claims fall into this category, representatives stated that the current design of their database does not allow them to identify that information," Nichols wrote, adding that that amounts to "a significant flaw" in the system's design.

"The moratorium is the direct result of the oil disaster and people affected should be adequately, accurately and promptly compensated," she wrote.

Nichols also suggested that BP's willingness to pay claims may be correlated to the political pressure it's feeling to respond to the oil spill.

"Analysis has shown that BP issued the most claims checks in the middle of June, with a spike that came within a week of additional pressure placed on BP by the State. Payments to large loss claimants show the same type of spike immediately after the state pressured BP regarding those claims," she wrote.