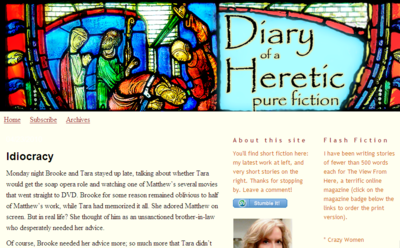 BLOG DESCRIPTION: Serialized stories about people like you and me, concerned with sex, death, faith, and redemption.

MY REVIEW: This is a blog of serial fiction. The author is telling a love story featuring various characters, and each day a new event happens in their lives. I'm not into love stories .... give me cliff-hanging detective serials any day of the week!.... but people who like these kinds of stories will like this blog.

What danger of subscribing to serial stories is... will the author keep writing it, or leave me hanging? This blog is well-established, so no fear there.

04/22/2010
Act Ecstatic
Always before, Matthew was as breezy and easy as the characters he played. His movies were popular because of his physical grace and three facial expressions: genial wit, befuddlement, and flirtatiousness. Conceivably, his first role stood apart. But then for Children’s Minds he had been a total novice; and, a brilliant director, who died years ago, had shown him week after week how to display mythic insight into children’s vulnerability.

Until this summer—until Brooke had changed everything—Matthew might have coasted along on his superficial charm for decades. An impossibility after this exceptional teenager had triggered such rapturous passion in him that he was helpless before her.

[ click here for the first episode, or here for previous one.]

And then, surprising them both, Fletcher had more or less rescued him. The old, alcoholic, Noel Coward-wannabe had taught Matthew to mask and use his terrible and unfamiliar dread, which hinted at incomprehensible depth. Great for the stage, and even to some extent real life, but totally contrary to the James Bond ethos.

Without a clue to the problem, Jeffery admitted that Matthew certainly looked the part. But his apathy was disturbing. Why, for example, wasn’t he infinitely grateful, even ecstatic about the People magazine cover? “Think about how many times I had to get down on my knees to get that, Mr. SMA. Your last hit was five years ago.”

Matthew nodded; he knew that.

Matthew convinced him, or thought he did, to chalk up any enthusiasm deficit to jet-lag and low blood sugar—both gone now. Besides which, had Matthew been anywhere near the spotlight, he would be the consummate James Bond, regardless.

To prove it, he phoned Barbara to confirm their date tonight, purely business; yet Matthew must behave so smitten with her as to be subtly suppressing wild fantasies.

Jeffery had arranged the date through Barbara’s assistant immediately after Matthew had phoned about the silly Hamlet scene.

How fortunate that Barbara happened to be in LA! Matthew was now talking to her assistant (a man named Kyle like his flight attendant.) Together, they marveled at Matthew’s good fortune. Amazing really, that Barbara had decided to postpone several other engagements tonight. Kyle then took Matthew’s already on speed-dial phone number for formality’s sake.

Since it was now nearing cocktail hour, Jeffery ordered a martini and Matthew requested Earl Grey and cookies. As he poured his tea, Barbara telephoned.

Eight o’clock? Perfect. She gave him the address of a private club and hoped he enjoyed ballroom dancing.

“It’s new to me, Barbara, but no doubt with you covering for me, we’ll look great.”

Actually, whenever possible, Matthew took dance lessons of some kind. And ballroom dancing was the most recent. Once again, lucky Matthew.

Jeffrey said, “Feel free to discuss the Hamlet thing with her. It’s a done deal, partly because she so adored walking through Central Park with you.”

“Great—it might save me a meeting. And please, pretty please, Jeffery, can you try to arrange the chemistry-checks for tomorrow afternoon?”

“Those girls are at your beck and call. But you need to stick around, honey, two days minimum. And really, act ecstatic about everything that’s going on.”

When they were finished, Matthew insisted upon putting the bill on his Amex, another formality. Alone in his room, he decided he was already dressed for dinner with Barbara. The day Jeffery didn’t swoon over his appearance, Matthew should count his teeth, but the minute he had entered LAX, he noticed second glances everywhere. And after his paranoid nightmare leaving Kennedy airport, he didn’t doubt his intuition. People magazine would be very happy with him.

His angel Brooke would not. He’d be getting home two days later than he’d promised, and he needed to be with her now—that’s what this was all about. Clearly, despite what he’d told Jeffery, he was in much more trouble than he imagined. He missed Brooke terribly; and it was all he could do to wait until she was likely to answer before calling home. Even though he knew that once she learned he was delayed, she’d only slam down the phone, and refuse to pick up his call-backs.