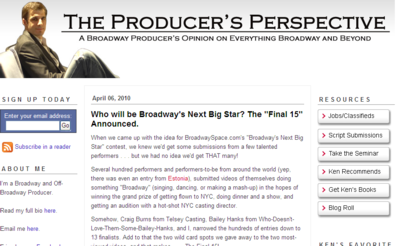 BLOG DESCRIPTION: Have you ever wanted to know what it's like to be a Broadway Producer? Ken Davenport, one of Broadway and Off-Broadway's youngest Producers (Will Ferrell's You're Welcome America, Speed The Plow, Blithe Spirit, 13, Altar Boyz, The Awesome 80s Prom and My First Time), as well as a Crain's Magazine's 40 Under 40, shares the secrets of his success in this book, which features entries from his widely read blog, TheProducersPerspective.com. The entries in this book have been featured in Vantity Fair, NY Magazine, The Gothamist, Gawker and more and inspired Manhattan Magazine to call Ken one of Manhattan's "Next Generation of Cultural Thinkers." And yes, that was him in that iPhone commercial.

MY REVIEW: As a theater enthuisaist (albeit one who can afford to go only to regional theater, and certainly not Broadway!) I love these kinds of blogs, where we - the little people, the people out there in the dark - get to see the inside of the theatrical experience from the people who actually work there. Actors have their persecptive, producers have theirs, and its interesting to read both sides. (And of course stage hands, choreographers, etc. It's all good - when written well, of course.)

So if you're a theater fan, you'll love this blog. Subscribe to it.

10 Questions for a Broadway Pro. Volume 4: The Spin Doctor
If you think your job has changed over the last 10 years because of the explosion of the information age, just imagine if you were a Broadway press agent! The reviewers that you've been courting for years are disappearing or their power is decreasing. Hundreds . . . literally hundreds . . . of new media outlets (like, um, blogs) have popped onto your screen, demanding attention. Sitting on a story is next to impossible as closing notices get posted online well before they get posted at the theater. Etc. Etc.

All of these new challenges fall to folks like the genteel Adrian Bryan-Brown, one of the partners of the public relations powerhouse Boneau/Bryan-Brown.

Just one look at BBB's website, and you'll see that Adrian is one of the most trusted Press Agents in the biz. And if you get a chance to hear Adrian speak at an ad meeting, you'll instantly realize while so many Producers want him speaking on behalf of their shows (and it's not just the British accent . . . although that never hurts).

We can't hear him speak, but we can read his answers to our 10 questions, so here goes!

Partner, Boneau/Bryan-Brown, a full-service press, social and public relations communications office for the theatre. “Press Agent” doesn’t fully describe what I do!

2. What show/shows are you currently working on?

My partner, Chris Boneau, and I, head teams that work on several shows. Between now and the end of the season, the new productions I am lucky enough to be working on include, in chronological opening order, The Glass Menagerie, RED, Lend Me a Tenor, Million Dollar Quartet, the Off-Broadway transfer of The 39 Steps, La Cage aux Folles, Sondheim on Sondheim and Lips Together, Teeth Apart. Right now, I am also working on campaigns that keep the long-running shows Jersey Boys and Mamma Mia! top of mind in the midst of competition from the Spring openings.

3. In one sentence, describe your job.

My office and I create editorial awareness for the theater in all media, and on social networks, building a desire in a consumer to buy tickets to the shows we represent. Simply, we do anything we can in the media, that doesn’t cost a production money, to spread word of mouth and sell tickets.

4. What skills are necessary for a person in your position?

I enjoy working on shows directly along with teams in my office. The skills required to work in this field include being able to tell a story succinctly and clearly without hyperbole (one of the few good things about the 140 character Tweet); the ability to identify what’s newsworthy; and, a fascination for detail, without losing the bigger picture. You have to enjoy dealing with not only the media, but also everyone involved in every department of a theatrical production from playwright to dresser to ticket-taker to star. It helps to have stamina, patience and a stomach for a lot of rejection. You will also do well if you can function on less than 6 hours sleep most of the time.

5. What kind of training did you go through to get to your position?

I have a college degree in Zoology and I am a qualified SCUBA diver. Growing up in New York and London, I was fortunate enough to see all the great musicals of the 1970s on Broadway, and the work of the theatrical knights (Gielgud, Redgrave, Richardson) in the West End.

6. What was your first job in theater?

I started as an intern with Susan Bloch who was the press representative for several Off-Broadway theatre companies and dance companies visiting from overseas. After three months I realized I loved it and said I couldn’t work for subway tokens any more. At that time I used to supplement my income by taking photographs at opening night parties, often selling them to the New York Post – no one else wanted to schlep down to South Street.

7. Why do you think theater is important?

It’s human. It challenges and rewards like no other art form. It requires true collaboration to be successful. It is fresh and different every time. The experience cannot be replicated. It’s 3D and you don’t need the eye-glasses.

8. What is your profession's greatest challenge today?

The economic pressures that have always been around are a given and will never change. The new media is exciting and offers fantastic opportunities. The cyber-revolution is the big challenge because it is a big unknown and has made everyone who works in the theatre rethink what they do. I believe it is also extremely liberating. We have so many more places to tell our story and we can take more control of how we share information.

9. If you could change just one thing about the industry with the wave of a magic wand, what would it be?

The business can become so desperate at times. It is very hard work and very competitive, which is what makes it exciting. We should make greater efforts to support each other and be more encouraging of young people who want to commit their lives to working in the theatre.

10. What advice would you give to someone who wanted to do what you do?

There are easier ways to make a living, so you should check out if this is what you want to do by doing it. An internship is a great way to learn about the business and more importantly find out if this is a world you want to be part of.