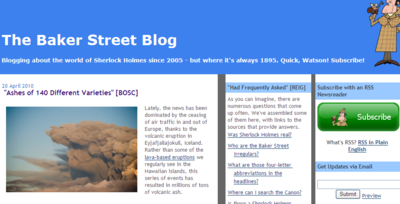 BLOG DESCRIPTION: The leading blog about the goings-on in the world of Sherlock Holmes - past, present and future - as written by a member of the Baker Street Irregulars.

MY REVIEW: I love this blog. I don't know that I love it for $1.99 a month, but a serious Sherlock Holmes fan might. (KIndle's blog pricing continues to mystify me...authors can't set their own price. The price starts out automatically at $1.99...and then through some formula known only to Amazon, may or may not drop down to 99 cents, with the blog owner none the wiser. )

But if you're a Sherlock Holmes fan, and if you yearn to be privy to the secrets of the Baker Street Irregulars (an organization based in New York) subscribe to this blog and check it out.

Lately, the news has been dominated by the ceasing of air traffic in and out of Europe, thanks to the volcanic eruption in Eyjafjallajokull, Iceland. Rather than some of the lava-based eruptions we regularly see in the Hawaiian islands, this series of events has resulted in millions of tons of volcanic ash.

We know that Sherlock Holmes was an expert on identifying ash - he tells Watson in A Study in Scarlet:
"I have made a special study of cigar ashes - in fact, I have written a monograph on the subject."

And then again in "The Boscombe Valley Mystery" from The Adventures of Sherlock Holmes, Holmes again shares his pride in his special powers:

I found the ash of a cigar, which my special knowledge of tobacco ashes enabled me to pronounce as an Indian cigar. I have, as you know, devoted some attention to this, and written a little monograph on the ashes of 140 different varieties of pipe, cigar, and cigarette tobacco.
No mention of his knowledge of volcanic ash, however.

In today's fast-paced technology-laden world, it's astounding that something so basic an primordial as a volcanic eruption could disrupt travel globally. It makes one wonder if it would be easier if we lived in the era of the transatlantic liner as the primary means of getting to and from Europe.

If you happen to be one of the many who are thus waylaid this week, we hope that you'll take the time to peruse the Canon - perhaps looking for your favorite mention of ashes. Then again, there are some ASHes of an entirely different variety with whom you might enjoy spending some time...