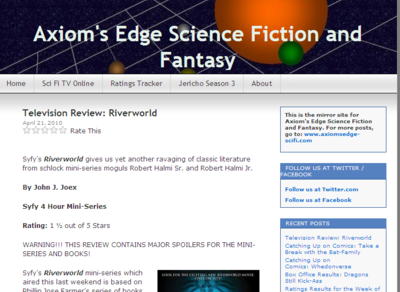 MY REVIEW: Science fiction fans will enjoy this blog. As the description says, it covers everything from books to comics, to TV to movies. Posts are well-written and informative. The blog is updated on a daily basis, as well.

Cancellation Watch: Final Predictions for the Season for Sci Fi Bubble ShowsApril 28, 2010
By John J. Joex
The current season is just about over, in fact several shows have already wrapped up their runs, so it’s time for the final set of predictions as we get ready for the final lap to the season end. Chances are, none of the networks will make any cancellation announcements in the next week or two as they will hold onto all of their cards going into the upfronts where they present their schedule for next season to their sponsors and the press. This will happen in mid-May (see dates below), so those of you waiting for word on your favorite show will likely have to wait until then to know its final fate. That’s not true with Legend of the Seeker, though, as Michael Ausiello of Entertainment Weekly has reported that one has already received the axe. But that’s a syndicated show and is not subject to the same considerations as the broadcast networks. As for the rest of the shows still with uncertain fates, I will look at them by the network.

On NBC, Chuck and Heroes both took ratings slides this year, though the latter saw a much more dramatic drop than the former. As to whether either can expect to return for one more year, I believe it all depends on how NBC responds to the Leno-pocalypse. They took a pretty serious drubbing for their Jay Leno experiment and the network’s overall numbers continue to decline. Thus, I believe that they go into next season trying to get a fresh start which means cutting all the dead weight they can. That definitely includes Heroes and could also expand to Chuck. On the other hand, both of these shows have been around for a while (Heroes – 4 seasons, Chuck 3 seasons), so they could look at padding out the episodes to improve their appeal for the syndication market, though neither would hit the magic 100 episode number with one more season. Heroes does continue to perform strong in foreign markets, so it has that in its favor. And according to the Hollywood Reporter, NBC is strongly considering giving that show a thirteen episode order for a final season. Still, that network is sinking fast and the Leno debacle caused them to take on even more water, so I say they push the panic button and jettison anything that will keep them from staying afloat. I could be wrong, but that’s what my gut tells me.

On CBS, the days for Ghost Whisperer, once king . . . er . . . queen of Friday nights, may be numbered. That show has seen a significant drop off in its numbers this year and CBS is notorious for having little patience with shows performing poorly in the ratings as well as anything in the Science Fiction and Fantasy genre. True, it still usually wins its timeslot on a night where all the networks struggle, and Medium has finally given it a decent lead-out, but both shows have sunk below a 2.0 rating in the 18-49 demographic for their season averages. Considering that Ghost Whisperer averaged a 3.6 rating last year and Medium a 2.9 (on NBC), this does not paint a good picture for their future. Also consider that CBS cancelled Eleventh Hour last year even though it ended the season in the Top 25 and averaged a 4.2 rating. Both Ghost Whisperer and Medium have already surpassed the 100 episode mark, so they are good for a syndication run, thus no reason to try and pad out episodes. The eye network may hold onto these two because they still do well for a Friday night, or they may just purge the schedule and start over and I see them leaning in that direction.

On ABC, I don’t think there is any question on the fate of the two bubble Science Fiction and Fantasy shows. FlashForward has tumbled so far in the ratings that two weeks ago Vampire Diaries, on perennial fifth place network CW, beat it in the ratings. And V has seen a steady downward trend in its numbers since it debuted last Fall. That one did stabilize last week and if it could trend up as it wraps up the season, it has a slight chance of survival. It would have to build back up to around a 3.0 rating, though, if it has any chance of seeing a second season and that looks doubtful. FlashForward, on the other hand, is done. Even if it did trend up for the rest of the season, it has already sunk too low to receive any serious consideration for a renewal. And don’t believe the claims that this one could survive because it has done well in foreign markets. That may work for a veteran show like Heroes, but ABC is not keeping around show performing well below a 2.0 in the ratings just because people overseas are watching it, especially not a freshman show. I say there is little question that both of these shows get the axe by season end.

At FOX, Human Target has a brighter future in my opinion. It has not been a ratings darling in its initial season, and it has trended downward throughout the season, but it has also typically won its timeslot on Wednesday nights. It’s also a very Prime Time friendly show in that it delivers fast-paced action, escapist entertainment, and mostly self-contained stories. I say FOX keeps this one around for another year and hopefully they decide to move it to a slot after American Idol to give it a strong lead-in to build up its audience.

The schedule for the upfronts for each of the broadcast networks is as follows: FOX and NBC – May 17th, ABC – May 18th, CBS – May 19th, The CW – May 20th. So unless a network decides to make an early announcement (more likely with renewals than cancellations), that’s when you will find out the fate of the remaining shows on the bubble. Stay tuned to this site in the mean time as we will bring you any breaking news as soon as we can. And enjoy as many of the shows mentioned above while you can because I am expecting the majority of them to be gone by season end. And check our Cancellation Watch page for the status of any of this season’s Science Fiction and Fantasy shows not mentioned here.