I Hate My Message Board (Lifestyles & Culture) 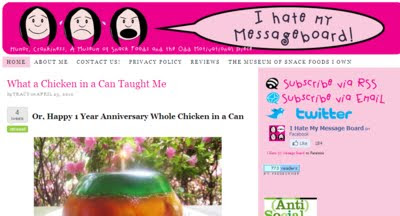 AMAZON SUBSCRIPTION LINK: I hate my message board

BLOG DESCRIPTION: My name is Tracy, I have issues. I have a blog that's mostly about my skewed take on life. I pour chickens from cans and take pictures and call it my career. My life coach thinks I'm awesome.

MY REVIEW: This blog is an offshoot of the author's "I Hate My Message Board" message board. One thing that strikes you from the get-go is the link to the blogger's "The Museum of Snack Foods I Own" in her banner.

Then I read on and see she is a child of the 70's - this may be closer than I want to get.

She posts once or twice a week. She bounces around from commenting on candy bars, to mug shots of local criminals, and an expressive comment that there had been a tragic loss in her husband's family that she didn't want to get into details about, but then a post about an emotional crying episode while driving.

I'm assuming that if you are a member of the IHMMB community then you can relate to this blog. I cannot. It is just random.

The author, in this reveiwer's opinion, is trying to do many things in one blog and not posting enough.

Sample post (many photos of the de-canned chicken, not reproduced here):

Or, Happy 1 Year Anniversary Whole Chicken in a Can

One year ago today I uncanned that whole chicken. It probably wasn’t my best work and it sure the heck wasn’t my most tasteful, but in my two years of blogging it’s my most viewed post by far. As of today, it’s received 140K page views on my blog, which doesn’t include the people who’ve seen it reposted on other sites.

So, I thought I’d take some time today to celebrate that chicken and all that it has done for me, even if I couldn’t be bothered to remember to buy actual candles.

I made this gelatin mold because I wanted to see what it must have looked like stuffed inside that can. And the answer is some sort of decrepit sea turtle.

I think my husband is reluctant to trim the azaleas because he doesn’t want the neighbors to see what I’m doing on the porch. And really, who could blame him?

After “Ewwwww” a common reaction was to wonder what was on my son’s face in one of the photos. The answer is Mo’s Bacon Bar. I’ve become much more vigilant about making sure that my kid’s aren’t in my grody food pictures. I have to admit that there was something rather disturbing about a small, partially cut off, smeared with some substance face in the background of this chicken oozing out of a can but it would have been nicer to let that pass without mention.

That’s one of the most important lessons having a post go viral like that taught me – you can’t control what other people will think or say, only your reaction to it.

I also learned that the more counter-culture and/or alternative the forum, the more EWWWWW they were about the chicken. On the other hand, the many gun and survivalist forums that discussed this had some pretty valid points about the practicality of such a foodstuff.

I learned that the larger the average sig file and dancier the average avatar on a forum the shorter and less insightful the post, as a general rule.

It kind of hurt my feelings but I realized that most people don’t read my words. But that’s okay because I have pay per page-view advertising on this blog.

There were a few folks that were rather hostile about my perceived lack of intelligence, creativity and kitchen skills. I was bemused by this.

I learned that a lot of the larger newspapers and website suck ass at giving credit and a link.

And I learned that it’s always a good idea to keep a sense of humor about yourself and never stop doing the things you enjoy.

So happy first anniversary chicken in a can and many thanks to everyone who has cheered me on and let me know about chicken in a can sightings in the wild and helped spread the word about this blog. I appreciate it so much!

RECENT POSTS:
--The Reinvention of Edison Thomas: A Book Review
--Sometimes I like to remind you I have five boys
--I had a dream, I had an awesome dream
--Dear Sons, This is why I don't buy you Yugos
--I finally Found it! The Jheri Curl Song