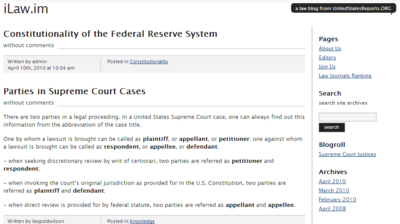 MY RECOMMENDATION: No - unsuitable for Kindle

BLOG DESCRIPTION: This blog has daily updated contents about supreme court cases and laws, such as legal terms and history.

MY REVIEW: There was a one month gap between "The Religion Clauses" posted on March 8, and Parties in Supreme Court Cases, published on April 10. Perhaps the blog was looking for a new blogger, and has found one in Leopold Wilson.

I would say that this is an excellent blog for lawyers, or those interested in the law, or the activities of the Supreme Court. There is a reservation about subscribing to it via the Kindle, however. On my Kindle, running system 3.3, I do not get the complete article, but rather a few sentences and an ellipsis saying that there's more to come. However, the ellipsis isn't an active link.

I have a suspicion that the latest Kindle operating system 3.3.3, may fix this problem, but I'm not really sure. [Kindle supposedly sends out their system upgrades to people on a regular basis - I have yet to receive such an upgrade.)

So what I'd suggest is that if you're interested in the topic, subscribe to it on their 14-day free trial. If yiou find that it is indeed not suitable for the Kindle (and I'm leaning toward thinking its not, frankly), unsubscribe and no harm done.

There are two parties in a legal proceeding. In a United States Supreme Court case, one can always find out this information from the abbreviation of the case title.

- when seeking discretionary review by writ of certiorari, two parties are referred as petitioner and respondent;

- when invoking the court’s original jurisdiction as provided for in the U.S. Constitution, two parties are referred as plaintiff and defendant;

- when direct review is provided for by federal statute, two parties are referred as appellant and appellee.