Retro-review Sunday: My Life a Bit South of Normal

Yes, this is one of the two blogs of my associate reviewer, Ann Currie, who signed on to be a reviewer for The Kindle Blog Report after I'd written this review. Posted way back in early Feb when this review blog was just getting started. She also writes a blog on "strange and particular silver." Feel free to subscribe to both. ; ) 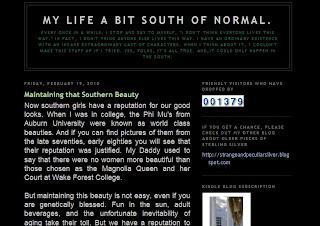 AMAZON SUBSCRIPTION PAGE: My Life a Bit SOuth of Normal

MY REVIEW: The author of the blog, who updates it every couple of days, is a 50-year old southerner who lives in the Deep South. I believe this means, South Carolina. (I’m from Minnesota, for all that I currently live in Virginia.) Most regions of the US (or indeed, of any country) have different traditions, menus and so on, as does every generation. (I’ve read about collards in books, for example, but I’ve never felt the need to dine on them. Sufficient to know that in the Deep South they are still a traditional dish!)

If you’re interested in people, you’ll enjoy these entertaining and amusing, and culturally-instructive anecdotes.

Cars of All Kinds
Well now here's a news bulletin, according to Forbes.com "Porsches smack of success. Hondas preach practicality. And, according to a recent report, Chevys proudly proclaim of their owners, 'I don't use the Internet.' " It goes on to say "If you'd like to cultivate an image of sophistication, try buying a 'Mini Cooper'." Apparently Rolls-Royce felt they were not fairly polled "As you can imagine, our customers do not really take surveys," says [a] Rolls-Royce spokeswoman.

Then there are the Toyotas, said to be "the quintessential family brand", one in four Toyotas is in a household with children under the age of eighteen (they had to sell the Porsche to afford the kids), the median age of owners is 55 (now that the kids have left, they have those college debts to pay off), and 60% have college degrees (they were smart enough to buy a good car that would last through those years). And with all Toyota's current troubles, I would still buy one today without a second thought and we plan to keep the four we currently have.

I grew up in a Buick family, now known as "one of Detroit's geriatric brands". Back then, they were a big deal. I remember our first Buick Electra 225 (duce and a quarter my Daddy used to call it). We had arrived. All I knew was it was big and fast. (I wasn't supposed to know about the speed part, but I tested it, and it passed.) Now Buick was on its way back with the help of Tiger Woods - or at least GM thought it was a good idea at one time.

Every time my DH and I look at cars he wants me to consider a mini van. Ain't gonna happen. I have my limits and they stop way before a mini van. He can go on for days about the great use of space, the utility value, the cargo room, yada yada yada. It's not going to happen. I want my regular 4 door sedan.

I like station wagons (now that dates me doesn't it) but Toyota doesn't make one large enough. I'm not sold on cross overs and since I live in the sunny south, I really cannot justify a SUV that was designed for foul weather and off road conditions. Think about it, the carpool line in any given southern town is full of these huge vehicles that were originally designed for hunters, outdoors men, and workers in inclement weather and treacherous road conditions. I don't think GMC had Maple Drive Elementary School in mind when they put the Suburban on the drawing board. And, don't even get me started on Hummers. But, now if you want to discuss the Porsche Carrera, I'm all ears. We can all dream.

My desire for a Porshe Carrera is pure lust, I could care less what image it portrays. After all, it is the thrill of the drive. The dream started when I was 16 and started begging Dad for a TR-6, dated a guy for his vintage Jaguar - it was sweet and he was pretty nice also. Then in college, fell in serious like with a great guy and is serious love with his MGBGT. At least, I am honest, like the late Ted Kennedy put it so well, ". . . the cause endures, the hope still lives, and the dream shall never die."

As a postscript, I could be practical - Porshe now makes a four door sedan, the turbo charged Panamera. After all, I am all about sedans. But in this case, I am all about me and four doors is not in the plan.

RECENT ARTICLES:
--A New Puppy
--Planning for Tomorrow
--Jury Duty
--Ah, but then . . .
--A Realization of Faith
--Cars of All Kinds
--The Pleasures of Running Water