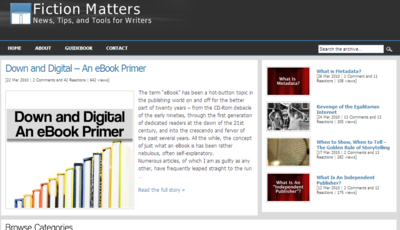 BLOG DESCRIPTION: Fiction Matters is a leading source of the publishing news, writing tips, and fiction tools that writers care about.

MY REVIEW: Well, the blog hasn't been updated since March 26, 2010. Prior to that day, it had been updated on a pretty regular basis, so I'm not sure what's goig on.

The blog transfers well to the Kindle, and there's lots of good info there, so I hope the authors will get their girdles in gear and get back to regular posting.

I'll keep an eye on it and alert you should it become live, or you can subscribe to it for two weeks and see what happens...

Metadata is a word commonly used in conjunction with eBooks, both as something that typically needs improvement and something that can really improve the eBook experience. But what exactly is it?

By definition, metadata is data that describes other data – an explanation that begs for examples. Thankfully, if you’re familiar with books, you’re already familiar with some of the more popular types of metadata, like genre, author’s name, and publishing date. The piece of metadata “fantasy” provides a fairly good description about the book, or data, in question. As does the author’s name, or publisher.

Common pieces of metadata attached to a book include:

BISAC Code (how genre is classified in a trade environment)
Contributors
Description
ISBN
Language
Publication Date
Publisher
Title
These pieces of metadata are rather broad, but they give a good general understanding of what a book is. When used in an electronic database, readers can collate and sort books based on these pieces of information – finding all the books by a particular author, or in a particular genre, or published in a given period.

But one of the most promising elements of future publishing is creating a more robust metadata environment – a phrase seemingly tailored to put people to sleep. More metadata? How much more do we need? Well, with metadata, the more you have, the more you can do. Imagine, if you will, a system where more specific elements of a book are included in the metadata – character names, ages, locations, events, dates – and can be referenced at will.

Such a system would allow readers to find books featuring protagonists in the seventh grade. Or where a character is an oil prospector. Or a book set in a specific time and location. With a robust metadata system, a reader could easily compare and contrast a modern book regarding the Spanish-American War with one written at the time.

The eBook, especially in a connected scenario, allows for even greater use of metadata, moving beyond merely comparing books and instead serving as a hub for disparate information from around the web. A New York City diner used as a location in a novel could be used to find other books where the diner appears. But, that same metadata could be connected to Google Maps for directions to the diner, pull images from Flickr, check the social sites for mentions, and IMDB for films in which the dinner appeared. The metadata for the diner could even be used to grab the menu, if the diner is the diner has a website.

Granted, the connected eBook is still a ways in the future. Technically possible today, specific metadata is hindered by one very nagging detail – the assigning of metadata is a time-consuming activity. The metadata for print books has been standardized and is generally considered essential for the supply chain. Metadata for eBooks, even the broad items like author’s name, can be sorely overlooked. And metadata is only useful when it’s correct. Convincing publishers to move beyond the basic metadata items and embrace an even more robust (and expensive) system of metadata seems like a long shot.

However, that kind of metadata could be an incredible value add. Imagine taking a tour of Paris and Spain using a connected version, electronic version of Hemingway’s “The Sun Also Rises.” Sounds like a good time to me.

RECENT ARTICLES:
-Down and Digital – An eBook Primer
-What is Metadata?
-Revenge of the Egalitarian Internet
-When to Show, When to Tell – The Golden Rule of Storytelling
-When Is Telling Better Than Showing – A Personal Example