An American Actress in London (Arts and Entertainment) 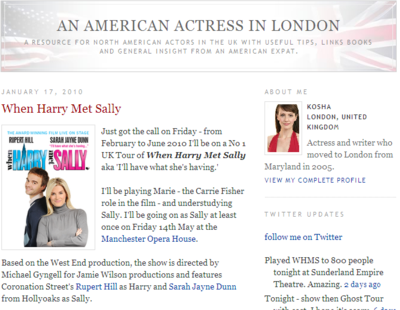 MY RECOMMENDATION: Visit on the web only

BLOG DESCRIPTION: Written by American expat Kosha Engler, an actress and Anglophile who married an Englishman and moved to London in 2005. Having worked in film, television, theatre, radio and commercials in the US and the UK, she offers insight into life as an actor abroad.

MY REVIEW: I'd love to give this blog a thumbs up review, unfortunately she hasn't posted since January 17, 2010, when she got a role:

Just got the call on Friday - from February to June 2010 I'll be on a No 1 UK Tour of When Harry Met Sally aka 'I'll have what she's having.'

I'll be playing Marie - the Carrie Fisher role in the film - and understudying Sally. I'll be going on as Sally at least once on Friday 14th May at the Manchester Opera House.

So perhaps she'll start posting in the blog again in June! However, she does seem to update her Twitter account on a regular basis:

Played WHMS to 800 people tonight at Sunderland Empire Theatre. Amazing. 2 days ago
Tonight - show then Ghost Tour with cast. I hope it's scary. 6 days ago

I wish she'd talk about doing the show on a day-to-day basis, the interactions between the actors - are they remembering their lines, forgetting them, are the audiences "getting" the same jokes in the different theaters, etc, but I guess when you're acting in a play, probably twice a day except for Mondays, you don't have a lot of energy left over for writing.

Neverless, the archives are at her website - she's been blogging since 2006, so theater buffs, and aspiring actors, should check it out.