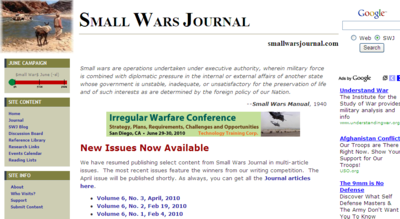 MY REVIEW: Military enthusiasts will want to read this blog. The entries are well written, either from the authors of Small Wars Journal themselves, or links to appropriate articles from current newspapers like the Washington Post and so on. (On the Kindle version, you'll have to click the Read More link.) There are so many entries that don't require a "Read More" link, so I don't count this against them.

Why the new National Security Strategy isn’t strategy
Posted by Robert Haddick on May 27, 2010 9:49 AM

Today the Obama administration rolls out its National Security Strategy (my Foreign Policy colleague Josh Rogin got the pre-release document).

The new National Security Strategy (NSS) has the skeleton of a true strategy. It properly begins with ends, describing America’s enduring national interests (security, prosperity, values, international order). It then moves on to ways, the approaches and actions the United States government will employ to achieve those ends (for example, non-proliferation strategies, encouraging science research, promoting human rights, and strengthening alliances). It even discusses means, the resources the government and the country will mobilize to implement the ways. So far, so good.

But what is missing is an honest analysis of the obstacles, challenges, and adversaries that stand in the way of execution, and how the government intends overcome these. The strategic world is almost always competitive; smart and experienced adversaries are attempting to thwart success. The strategic competition is a match-up of strengths and weaknesses; the NSS has virtually no discussion of these match-ups. The NSS in long (very long) on ideals and aspirations. It does very little to recognize the competitive global environment, the strengths and weakness the United States brings to the competition, and how these compare to the advantages and vulnerabilities of adversaries (who largely remain unnamed in the document).

It is also the case that the ends – the enduring national interests (security, prosperity, values, international order) – will frequently come into conflict with each other. For example, pursuing security in a certain case may inflict stress on the international order. Some policies designed to promote prosperity may require taking risks with security or with values. The NSS does not reveal its priorities in this regard or the framework for how policymakers will resolve such conflicts.

We should not be too surprised by these shortcomings in the document. It may be asking too much of the United States government’s top officials to reveal their analysis of America’s strengths and weaknesses and how those match up against those of adversaries. Nor should we expect that when interests and goals come into conflict, policymakers will tell us which ones are expendable.

The resulting document thus seems more like a windy political campaign speech than frank strategic analysis (the Bush administration’s 2006 NSS measures up no better by these standards). So what is the Obama administration’s real national security strategy? How does the administration really view the competitive environment, honestly size up America’s capabilities, evaluate the vulnerabilities of adversaries, and really rank the priority of its goals? We won’t know until some archives are opened far in the future.

It is understandable that the administration’s real strategic appraisal must remain classified, otherwise adversaries would have crucial information to develop even more effective strategies. It would be refreshing - and fortifying - if a more revealing NSS caused the American public to have an open debate on ends, way, and means; America’s competitive strengths and weaknesses; and on what the country’s strategic priorities should be. A version of that debate occurs (sometimes) every four years. From the perspective of administrations currently responsible for day-to-day governing, that is often enough.

RECENT POSTS:
--The Ship is the Visual, Even in the Shadow Zones
--Memorial Day, For a Father Whose Son Was Killed in Iraq
--31 May SWJ Roundup
--Memorial Day 2010
--Afghanistan and Pakistan Update