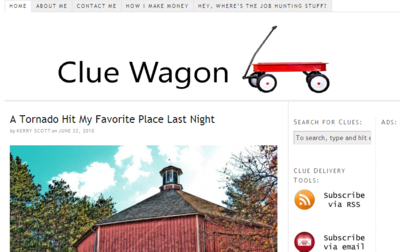 BLOG DESCRIPTION: After nearly 15 years in human resources, I left to stay home with my two small children. Then I started a blog for job seekers. After a year of talking about resumes and interviews and crazy candidates, I finally worked up the courage to pursue my REAL dream: becoming a professional genealogist. Now, instead of talking about employment forms, I talk about census forms.

My blog is about my journey, my research, and occasionally about ice cream. It’s fun. You should visit.

MY REVIEW: I enjoyed this blog a great deal. The author writes well, and covers an interesting variety of topics in the genealogy field. People who are interested in setting out to find their relatives will find this blog of great interest, and people who are just interested in history in general will also enjoy it.

The one caveat - the author only updates the blog 3 or 4 times a month.

About That Guy In The Morgue…
by Kerry Scott on May 17, 2010
Photo not reproduced

Edward Lee Ackermann was born in 1926 in Richmond, Virginia. He was adopted by Fred Ackermann and his second wife, Dorothy Ann Meyerhofer. Dorothy already had an adopted daughter, Mary Elizabeth, from her previous marriage.

When he was 16, Ed applied for a Social Security card so that he could work at the Sears and Roebuck store on Pico Boulevard in Los Angeles. When he was 18, he joined the Army, and he served for three years. I don’t know yet what he did for a living when he got out of the Army, but I know he’d been a security guard for two years prior to his death at age 68. He never married, and lived with his mother for many years (in fact, the house he died in in 1994 on Glenville Drive in Los Angeles is the same one listed as his mother’s residence when she died in 1967).

Ed died of natural causes, and was found by the wife of his roommate/friend, Robert Walton. Ed had written a letter for Robert years before saying that he was adopted, his parents were dead and he had no other family, and that he was a veteran. Robert turned the letter over to the police when they came to investigate Ed’s death, and that’s how Ed came to be buried at Riverside National Cemetery.

As it turns out, Ed did have family when he died. His parents had divorced sometime before they both died in the 1960s, and Ed’s sister Mary Elizabeth died in 1982. Ed and his sister’s family had been estranged for years, and they had no idea that he had passed away. In looking for clues about him, I found them. They gave me the picture above, and some details about his life. It’s funny how Ed’s alone-ness at the end of his life ended up bringing together some branches from his family tree years later.

I’m both relieved and a little sad that Ed’s story turned out to be so ordinary. I had pictured some dramatic end…homelessness, or a crime scene, or some other scenario that probably comes from having watched too much Law and Order. In truth, his story didn’t have any “ripped from the headlines” twist. It could be the story of any of us. I find that a little unsettling.

RECENT POSTS:
--A Tornado Hit My Favorite Place Last Night
--What’s in a Name?
--Ugly People Don’t Need Jobs.
--Got Doctors in Your Family Tree? Then You Need This