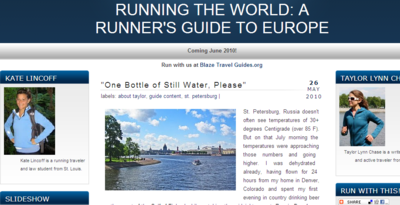 MY REVIEW: I cannot recommend this blog highly enough. It's two blogs in one - a running blog and a European travel blog. I love it. (Well, I'm a biker, not a runner, but the ethos of the runner, walker or biker is much the same, we want to be out and doing, with a heart for any fate.)

The two authors are writing for Blaze Travel Guides, a company they intend to launch in June, and this is the companion blog. If you're a runner, or if you're interested in European (west and east) travel, you'll find much to enjoy in this blog.

Don't giggle. "Terviseks" (yes, pronounced "ter-vee-SEX") is Estonian for cheers, and today Blaze Travel Guides would like to congratulate this small nation on its being one step closer to adopting the Euro.

Okay, so being part of the Euro zone is not quite what all the cool kids are doing these days (see Greece, Current Economic Crisis In). But still, raising their economy to this level is quite an accomplishment for the Estonians. And it will make active travelers lives easier.

See, there's a reason we recommend a training program for those of you preparing to go to Northern, Central, Southern, or Southeastern Europe this summer. Of all the countries in this region, only Slovenia and Montenegro use the Euro (and why Montenegro? We're not sure. But it was only founded it 2007, so maybe it's too new of a country). This means that, as you travel from one capital to the next you will also be running from one currency exchange booth to another. As in, Estonian Crowns to Latvian Lats. Latvian Lats to Lithuanian Litas. Lithuanian Litas to Polish Zlotis, and Polish Zlotis back to Crowns but this time of the Czech variety. Don't mix them up. One is worth a lot more than the other (but after all our travels, we don't remember which).

So it's nice to learn that, despite the chaos being wrecked on the Euro at this moment, there is an economy somewhere that has proved its stability. And indeed, despite some uncertainty over inflation, Estonia's is cruising. This is because, even though it is a small country, it does have an industry.

Tallinn has been called the Silicon Valley of the Baltic Sea, and among the numerous successful and influential startups that have come out of that reason, you might be most familiar with a little one called Skype. It's amazing to think that a city which was, a mere twenty years ago, locked behind an Iron Curtain, is now a major player in the communications world.

You can learn more about this and all sorts of other interesting things about Estonia, including where to run, when we launch Blaze Travel Guides this June. In the meantime, drink a toast to your Baltic brethren!