The Big Picture (business and investing) 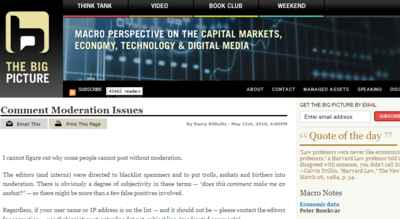 MY REVIEW: I have to admit this blog is a bit over my head...discussing concepts of high finance that I do't really get. But if you're an investor, with big bucks, you'll probably want to check this out.

Are Nasdaq100 Insiders Dumping Stock?
By Barry Ritholtz - May 31st, 2010, 8:30AM Alan Abelson notes this in this week’s Barrons that the top 8 stocks in the POWERSHARES QQQ exchange-traded fund for the Nasdaq 100 — better known as just “The Qs” (QQQQ) — have seen some insider selling.

“There were 231 sellers and three buyers, which works out to a somewhat lopsided ratio of 77 to 1. All told, the insiders sold 59.8 million shares and purchased 15,200 shares, a sell/buy ratio of 3,933 to l. Not exactly a resounding vote of confidence in the prospects for their companies.

Insiders are hardly infallable investors and, as Alan observes, their investment habits are not a timing indicator. Still, they do tend to know a bit more about the company and its outlook than the analysts or the folks buying the stocks they’re so determinedly selling.

What this says about valuation, the market, or the recovery is up for debate. But its certainly worth thinking about . . .