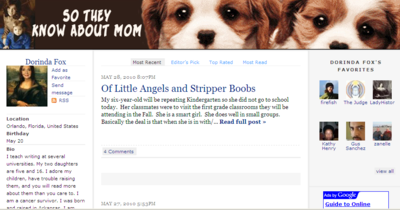 BLOG DESCRIPTION: This is the blog for Dr. Dorinda Fox

MY REVIEW: The author says she started this blog because, having cancer, she wanted some proof of her existene, and so started tis blog. The strange thing is, the posts at the blog seem to be wiped every other week or so.

In any event, she's a cancer survivor, who had a masectomy three years ago, who just learned her cancer has recurred.

This is a tough blog to read, from that standpoint, but you might find it interesting.

Of Little Angels and Stripper Boobs

My six-year-old will be repeating Kindergarten so she did not go to school today. Her classmates were to visit the first grade classrooms they will be attending in the Fall. She is a smart girl. She does well in small groups. Basically the deal is that when she is in with the larger group of kids she wants to party all the time and won’t listen to the teacher. I was speaking to an old friend of mine of 30 years who amazingly is also my boss about this. I explained that the hope was she would mature and grow out of this behavior in the next year. His reply was “I have been waiting for you to do that for thirty years. She won’t grow out of it.”

So she was home when I got some of the worst news of my life.

They saw something suspicious on my six-month mammogram, ultrasound, and SRI. The surgeon asked for a core biopsy. It was cancer. The nurse called and told me at two this afternoon

I spent a year of my life three years ago slugging it out to win Round One.

That is why I began this blog in the first place. If am no longer here there is a record somewhere of mom: the good, the bad, and the ugly.

But now on to Round Two with a tenacious opponent.

This summer I get a new body. Mastectomy. Reconstruction. Tummy tuck. I only had 15 pounds to go to a goal weight. Now maybe at 48-years-old I get to be Barbie with a flat tummy and perky boobs. Currently I am thinking 36C will do but have encouragement from some to get the stripper body if I can ;0)

My friends from basically birth to last week are all on facebook and much help has been offered. I am humbled and appreciative.

What was more humbling was my youngest daughter.

Loving someone is scary. That means losing them would hurt. We all get that. I say I love you rarely even to relatives because the likelihood of hurt is high. Loving my children right now is breaking my heart.

She has made me a dozen cards today all with “I love you. I love you. I love you.” printed from the top to the bottom of the page. She keeps telling me jokes and trying to make me laugh. She doesn’t know very many so she tells the same ones over and over. She has sung every song she knows how to sing. She has dressed up as a princess, a pirate, and a dinosaur. She insisted we go to through the car wash because that is the most fun in the world.

This is what an angel looks like: [photo not shown, of her kid]

This is why I have to win Round Two.

RECENT POSTS:
--Of Little Angels and Stripper Boobs
--Why Try? I So Suck at Zen
--Fear Makse a Booty Call
--Wisteria Lane Refugee
--Not One of the Special Eight Women