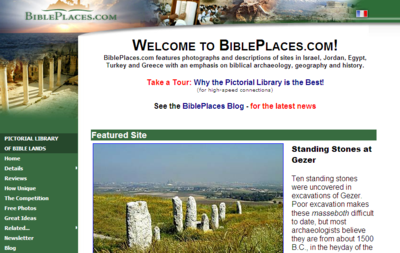 (Their website description says it better: BiblePlaces.com features photographs and descriptions of sites in Israel, Jordan, Egypt, Turkey and Greece with an emphasis on biblical archaeology, geography and history)

MY REVIEW: You don't have to be a believer in the God of the Bible (or Allah of the Koran) to be interested in the places mentioned in those books. And its certainly safer to read about the places in the "Holy Land" then to try to visit them, although of course you can do that to, and this blog will assist you in learning more about the sites you'd like to visit.

The posts are well-written and informative. There's the occasional "Read more" link, but not so many of those as to become annoying. (You can get to the web from the Kindle, I just find myself too impatient to wait the 10/20 seconds for that to happen!) There are also lots of photos, which show up better in color on the site, of course.

The Vatican will not be taking control of the Upper Room (Room of Last Supper, Coenaculum) according to this report in Arutz-7:

Israel National News has learned that the Last Supper Room is off the negotiating table, at least for now, in talks between Israel and the Vatican orchestrated by Deputy Foreign Minister Danny Ayalon.

One of the most difficult points of contention between Israel and the Vatican is the question of who controls the Last Supper Room. The room is said to mark the burial site of Kings Solomon and Hezekiah, and is also located in the same structure that houses the tomb of King David. Further complicating the matter is the fact that the building is known as the oldest Catholic church in the world, and has also served as a synagogue and as a mosque -- in fact, Muslim inscriptions can still be seen on its walls. To simplify matters, the Last Supper Room was taken out of the agreement. "We basically reached the principle that it will not be part of this agreement," the source said. "We have wanted the status quo, and they have wanted sovereignty," since negotiations began 11 years ago. "At this point, it will not be discussed as part of this agreement, which is progress."

Progress was also apparently made on the issue of Israel's right to expropriate land when necessary, albeit not without some caveats. The status quo was maintained on most of the 21 disputed properties in the Land of Israel, but there were six outstanding exceptions in which Israel has allegedly agreed not to confiscate land "unless there is an extreme need": the Mount of Beatitudes, Tabha, Capernaum, the Church of the Annunciation, Mt. Tabor and the Garden of Gethsemane. "Obviously if there is a security situation, the State of Israel can expropriate, as is the sovereign right of any nation," the source said. "After 11 years, that's real progress," he said.

The full story is here [link to exterior site].