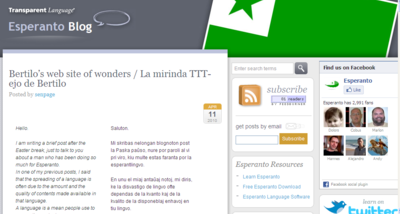 MY REVIEW: Now - THIS is how a language learning blog/website should be set up. Plenty of posts tackling various aspects of the language, plus posts featuring side by side translations of text. So on one column is English (the actual language of the blog) and the other column is Esperanto, so the reader can compare the two languages and learn, quite quickly, what's what.

Seeing this blog reminded me of the old magazine Quinto Lingo, which I loved, as it would translate the same story or article into five different languagues. It went out of print, and apparently an attempt to revive it as an online magazine in 2006 failed. Too bad.

What is Esperanto, you're asking?

Esperanto is the most widely spoken constructed international auxiliary language.[1] Its name derives from Doktoro Esperanto, the pseudonym under which L. L. Zamenhof published the first book detailing Esperanto, the Unua Libro, in 1887. The word esperanto means "one who hopes" in the language itself. The language's original name was "La Internacia Lingvo."[2] Zamenhof's goal was to create an easy to learn and politically neutral language that would serve as a universal second language to foster peace and international understanding.[3] Esperanto has approximately one thousand native speakers,[4] i.e. people who learned Esperanto as one of their native languages from their parents. There is controversy over the number of people who are fluent in Esperanto. The estimates range from 10,000 to as high as two million. The users are spread in about 115 countries.[5] This diverse and international community is evidence to most Esperanto speakers that the language is usable by people from all over the world and that it can establish communication between them.

What’s a Conlang?
Posted by Quintus Mar
10
2010In many fiction books, such as J. R. R. Tolkien’s Lord of the Rings*, and countless movies, such as James Cameron’s “Avatar”, you will read (or in Avatar’s case, hear) languages meant not to be understood, but to add to the depth of the culture of the characters: languages created to be unique to the setting. These are called conlangs, or constructed languages*. Time and again, you will find confusing vocabulary and grammar, as well as very native-looking words, sentence structures, unique sounds, and other interesting language features distinct to the languages themselves. It’s a great way to occupy space in a book, and to make the reader with a book, or the viewer with a movie, feel alienated from a group of characters. Which, in many cases, is a good, strong feeling to convey to an innocent consumer.

Many people, such as those neat folks from learnnavi.org and realelvish.net (thanks to Faith for the correction), learning Elvish and Na’vi, respectively, are created for the purpose of understanding and speaking these languages. However, when a vocabulary is 100% invented, with no similarities to English, French, German, Latin, Chinese, Korean, Russian, Esperanto, or any other vocabularies, it becomes increasingly difficult to memorize, and thus another barrier, along with grammar, to understanding the language. Although grammar is an increasingly confusing part of any language, once you learn it, it all comes down to the vocabulary. Further, inventing an entire vocabulary isn’t an easy task, and far less fun than inventing a grammar system.

For this reason, Esperanto makes a wonderful vocabulary background for constructed languages, or conlangs.

For example, let’s say we needed a language for a book about a civilization of cloud-people with very fluid, unique speech. Let’s use the Esperanto knab’, the stem for boy, as our basis for a word in our new language. Our noun-marker could be R instead of the esperanto O, and it could come before, rather than after, the word, producing rknab. That looks a lot like the word in esperanto for boy, knabo, as well as being completely unpronounceable. So let’s apply a few more grammar rules. Let’s add a vowel between r and knab, to make it more pronounceable and to give the word more meaning. For example, an A could mean a singular word, and an E could denote a plural word. That would give us raknab for boy, and reknab for boys. Another strategy could be to use the same A or E to denote feminine and masculine gender, respectively, giving us raknab for girl, and reknab for boy. In a real constructed language, many rules would be created to obscure the original Esperanto word, while retaining its ability to be recognized. For example, in the language in my book, which I’m co-authoring with a good friend of mine, the specifics of the grammar are still being hammered out, and will continue to be for about another month. Grammar is very complex, and is a very useful tool, as well as the only tool, to make vocabulary understandable. And with Esperanto vocabulary stems, it leaves a language creator to focus on the complexities of grammar.

So, as you can see, the grammatical systems of many constructed languages (think Klingon) can get very, very confusing. But maybe the vocabulary doesn’t have to be. But what do you think? Is applying Esperanto vocabulary to unrelated words to be looked down upon? Does it generalize languages into a common framework? Is Esperanto vocabulary too centered on its grammar? Let me know in the comments below this post. (All of the authors read them, I promise!)

*I would like to note that Esperanto is a conlang, but different than the ones detailed in this entry. Although it was constructed, it was not meant to simply be something to add to the plot of a book or movie; it was meant to be a fully-bodied language, and thus was meant to be as simple as possible, rather than to give fictional characters something with which to speak. Thanks to Christophe and Tony for this correction

*I also would like to make note that Elvish, by J.R.R. Tolkin was created to be a true and speakable language. The books came afterward. Thanks to Christophe for this correction

William Shatner, Star Trek's Captain Kirk, starred in Incubus, a horror movie in Esperanto. It can be watched at Youtube.