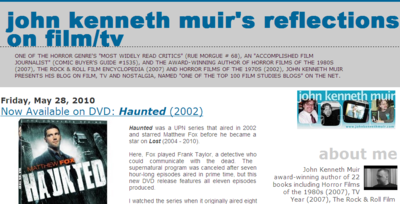 BLOG DESCRIPTION: One of the horror genre's "most widely read critics" (Rue Morgue # 68), an "accomplished film journalist" (Comic Buyer's Guide #1535), and the award-winning author of Horror Films of the 1980s (2007), The Rock & Roll Film Encyclopedia (2007) and Horror Films of the 1970s (2002), John Kenneth Muir presents his blog on film, television and nostalgia

MY REVIEW: Since I'm not much in to horror, I haven't read much of John Kenneth Muir's work, though I read an interview with him that The Thunder Child had.

He's a good writer. He's extremely knowledgeable about the horror and sci fi genres. So if you like those genres, give his blog a try.