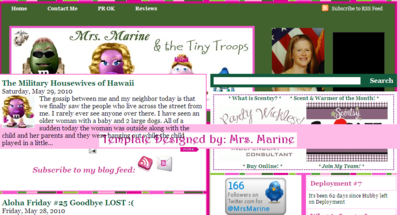 MY REVIEW: When I was a kid, my father, who was in the Air Force, was gone a lot. And when he retired, he was gone a lot also, because he got a job flying cargo. So he'd write me letters and postcards, which I treasured. [And, he was never on the front lines during a war, so I had no insecurity on that score.] Today, as long as a soldier isn't on the front lines, he (or she) can communicate with their children using a laptop computer and a camera, and they can each see each other and talk in real time, which makes life a lot easier.

The author of this blog talks about the typical mommy things, seasoned with the fact that her husband is off in Iraq. I can't really relate because when *I* was in my twenties and thirties, I would have given anything (short of getting married or having a live in boyfriend) to be able to stay at home. Not to look after kids, which I never had any interest in, but to do my own thing. Researching books I wanted to write, learning things I wanted to learn.

But this woman seems to be bored...to have no life outside wishing her husband was home and taking care of her kids. Well, I suppose that's moms for you. But when she talks about all the other military wives and how bored they are, doing nothing but sitting at home watching soap operas, I just want to shake them and tell them to get a real life! If they're bored at home, get a job. Go to school to learn a language, or some skill that could come in handy later, like child psychology, or how to handle Post tramautic stress disorder. Anything except just sitting at home sighing about how bored you are!

Okay - that is somewhat of an off-topic rant. This author hasn't had more than one post out of all that I've read that says she's bored, but I live in a military town and when I'm standing in check-out lines at supermarkers and women are talking in front of me or behind me, I hear quite a bit about how bored they are because their husbands are away for weeks at a time...

Whenever Bobo sees a man in Cammie's he yells, "Daddy!" And I always have to tell him "No, that's not daddy".

Yesterday we were walking to Princess's classroom to pick her up and a man in Cammie's passed by us walking fast. Bobo said "Daddy" and started chasing after him yelling "Wait, Stop". The man was oblivious to the fact that he was being chased by a little boy.

I started calling his name and telling him to stop running, but he kept going yelling over and over "Wait, Stop". He reached his little arm out for the man and finally I stopped him (fighting off the tears) and told him "That's not daddy, its a stranger".

He doesn't understand why Daddy "disappears". I tell him and try to explain it the best I can, but I know he doesn't fully understand. Princess has a hard time comprehending the length of time that Daddy will be gone. I show her on her calendar and she marks off the days and knows what day and month it is. But still, kids dont have a great concept of time. Even as adults, sometimes a week seems to fly by, other times it drags on forever.