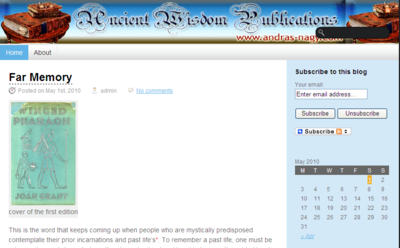 BLOG DESCRIPTION: What is the Ancient Wisdom? Ancient Wisdom is not to be taught for money! Ever!
The Ancient Wisdom is a body of cosmic knowledge of God(infinity) and creation that has existed for eons. It has been in existence since time began, long before the appearance of any of today’s major religions…..

If you look at it that way.... subscribe, check the articles, if you find them interesting, perhaps 99 cents a month is not that onerous. I don't think so, meself.

There is perhaps nobody who examined the vast differences between the mindset of the Eastern men and the Western thought than the American philosopher F. S. C. Northrop, who taught philosophy at Yale in 1923.

In his book, The Meeting of East and West he stated that the Western mind has been continuously searching for the theoretical component of existence — the causal link for how things happen, what is the cause, how the effect can be controlled, basically how man can manipulate nature.

Contrary, the traditional Eastern Mind is on a more contemplative and more striving towards the aesthetic. Balance and harmony.

The East traditionally seeks to find the aesthetic component of reality — not the theoretical, but the aesthetic.
Obviously, the western mind is in constant struggle and turmoil. It seeks to control nature and it is not always a winning battle. It has enlisted science and technology for this formidable task but in this striving many things backfired.
The expression of the east and west is not geographical anymore.

Sadly, there is overwhelming western mentality when you visit the east. And often you find, in isolated pockets, the revival of the eastern thought when you roam the United States or Europe. Geography and mindset is often in contrast.

In isolated cases you can still find the east in the places where you normally would seek, Japan, China and India. In the macro sense the west permeated with its ideology and technology all over the eastern hemisphere. It has reached a technological and industrial dominance, and we see the backlash in climate change and pollution everywhere.

The Western mind is the male component and the East is the female. Essentially, the Eastern ideas of harmony and balance are of love and the Western striving for control and power is of domination and struggle. From this chain of thought, it is clearly can be derived that the Eastern mind, if can be found, is more spiritual.
The Western mind is insatiable it always wants more; it wants it faster, smaller. It is never satisfied. The Eastern mind knows that overreaching is both illusionary and misleading.

The “Middle Kingdom” had turned itself away and became isolated. It became vulnerable. Shrouded in mystery and isolation it became a target of the west.

We must find the balance of technology that serves us, used in harmony and balance with nature so we can remain free. When pills and technology controls every single aspect of our lives, that is no longer WE are in control but as science fiction would have it, the robots took over.

RECENT POSTS:
--Far Memory
--Time and Space – a Dream within a Dream?
--The Guru Letters
--A Book that Took 11-Years to Write
--East and West