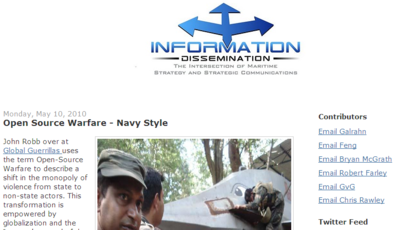 BLOG DESCRIPTION: A maritime strategy and strategic communications blog that provides analysis and news of events and activities for decision makers, military personnel, military analysts, industry professionals, and academics who study or work in the global maritime domain.

MY REVIEW: Well written blog. People with a military interest, in particular a naval interest, will enjoy this blog.

Look for plenty of political spin in the early reporting as the political talking heads give their opinion. I intend to read it over a few times and watch the discussion unfold before diving in too deep.

I will only make one observation at this point - it is absolutely clear to me that while Congress may have been quick to dismiss CS-21 when it was released, those who have become the decision makers in the Obama administration have basically taken the Navy's Maritime Strategy and incorporated those themes into our broader Grand Strategy. We saw it with the QDR too, and now we see it with the National Security Strategy.

Bryan McGrath and others involved in the development of CS-21 have previously mentioned how a small part of their intent was to 'push up' strategic thinking from CS-21. There can be no question about it now - the CS-21 strategy group HAS in fact set the foundation for the 21st century strategic thinking in the United States.