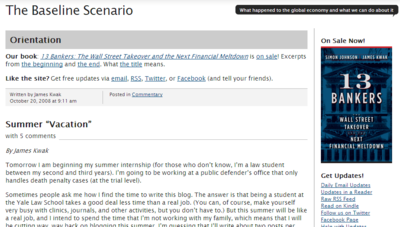 BLOG DESCRIPTION: The Baseline Scenario is a leading economics blog, described as "a must read" (Paul Krugman) and "one of the most informative news sites in the blogosphere" (Bill Moyers).

MY REVIEW: This is an excellent blog, a must read, and a must study. It's also an extremely depressing read, because it just shows how incompetent are the people - both Republican and Democrat - who are supposed to be keeping this country safe, secure and prosperous, are.

There is a caveat. James Kwak, one of the two authors, is apparently taking the summer off to work as a trial lawyer intern, and is not sure if he'll be writing anything for the next three months. He doesn't make it clear if his fellow author will continue to write. I expect he will, therefore, go ahead nad subscribe and check it out.

Regulatory Capture Underground and At Sea
By James Kwak

First there was the financial crisis. Then there was the West Virginia mine explosion. Now we have the BP oil leak. In each case, we were treated to news stories about the cozy relationships between the industry and the regulators who were supposed to be regulating it. (Here’s the latest New York Times story on how the Minerals Management Service was captured by industry — a problem that has existed for a long time, but that the Obama administration apparently did little to fix.)

Occasionally people say that the story we tell in 13 Bankers is really the same in every industry. That would not surprise me. I do think that the financial sector is unusual for a couple of reasons. One is that the interconnections between the major financial institutions make each one too big to fail in a way that, say, Enron was not. Another is that modern finance is so complex that it makes it easier for industry lobbyists to run roughshod over congressional opponents. But the problem of regulatory capture is obviously not restricted to finance, and it is a problem that we are seeing all over.

I’ve been meaning to write about this, but I haven’t had and won’t have the time. Arianna Huffington wrote an article on the parallels between the financial crisis and the West Virginia mine disaster. Lawrence Baxter has two recent posts (on his new blog) on regulatory capture and the role of regulation. Obviously this problem is not easily solved, especially in the wake of the Citizens United decision, which gave corporations even more influence over our political life. But hopefully the BP oil leak will produce a wave of anger — and a demand for answers — similar to what the financial crisis gave rise to.

RECENT POSTS:
--Summer “Vacation”
--The Future of Personal Computing, Part 2
--Regulatory Capture Underground and At Sea
--The Future of Personal Computing, Part 1
--The Consensus On Big Banks Shifts, But Not At Treasury
--Is The SEC Still Working For Wall Street?
--Good Government vs. Less Government
--So Damn Little Money
--Wall Street CEOs Are Nuts
--The Last Hold Out: Senator Blanche Lincoln Against 13 Bankers
--Regulation vs. Structural Change
--Why Does Steve Ballmer Still Have a Job?