Retro Review: This Is Momma's House 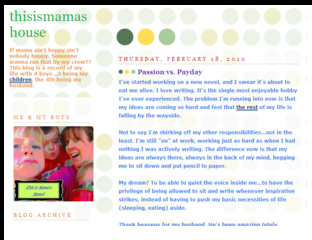 BLOG DESCRIPTION: If mama ain't happy ain't nobody happy. Someone wanna run that by my crew?? This blog is a record of my life with 4 boys...3 being my children, the 4th being my husband.

MY REVIEW: Women with kids will probably love this blog.

It is well written, and the tales told are humorous. I don't enjoy these types of blogs as much as those written by dads, because of course mom's are supposed to be like this, where very few people think dad's do anything...or worse, should do anything. (I'm thinking to myself - what is this - your husband can't help you do the laundry? Your kids aren't old enough to help you out?)


I always let my kids have the best of everything. Whether it's the last piece of pizza, the last scoop of ice cream, the last glass of milk....I always give up what I want for them. Always.


(My mom used to do this when we were kids, and still does this, and drives me crazy! It's the last scoop of icecream, you have it! And in any event my brother, the eldest kid in the family, had and has no respect for her, just because she's so willing to cast herself as unworthy of having the final piece of pie, et al. When your mom doesn't hold herself in high esteem, how can you as a kid respect her? I had those feelings to as a kid, also, I expected her to give me everything I wanted because of how she treated us - and yes, I got it, but she got no respect for it - now as a grown woman of 48 it still infuriates me when she does this - she still does this. But she sees herself as a mom who sacrifices for her kids first, last and always, instead of a an individual with just as much right to exist as her kids, and maybe even more because she is the parent.

Okay, sorry about that rant.

Here's a better example of her writing.


It's no secret that I can't cook. I try, really I do. I want my kids to have delicious, balanced meals that they can turn their noses up at. But it seems that no matter how hard I try, I always fall flat.

Well, not always. There are occasions where I actually produce a great meal. Last night was not one of those.

I had planned to cook chili. My chili recipe consists of browning hamburger meat before adding it to several cans of different type beans and stirring. That's it. Simple enough, huh? Yeah, you would think.

I had fended off several thigh attacks from my younger two while standing in front of the stove when I realized there was an awful lot of smoke coming from the pan. I was browning the meat, so I expected it to smoke, but what I saw was excessive, even for me. I ushered the kids out of the kitchen, because in my head I already knew what was about to happen. I was right.

I slid the pan off the eye, and the sudden introduction of oxygen caused a hot orange flame to burst forth and threaten to melt my mounted microwave.

This is the sixth, yes I said sixth, time I've set my stove on fire. I'm so used to seeing flames by now that there is no panic at all. I remember the first time it happened. I freaked out and covered the kitchen in fire extinguisher foam. Not anymore. I laughed to myself and said, "Well, damn. The kitchen's on fire again," as I opened the cabinet below me and reached for a pot lid.


RECENT ARTICLES:
-Passion vs Payday (an interesting post on her writing ambitions)
-Life's Moments (young son flunks a social studies test)
-Man am I HOT (Mom can't cook!)
-Mama's My Name, Laundry's My Game
-One Day With Chuck E. (Cheese - at the restaurant)
-You're Gonna Miss This (a song with foolish lyrics about raising kids)