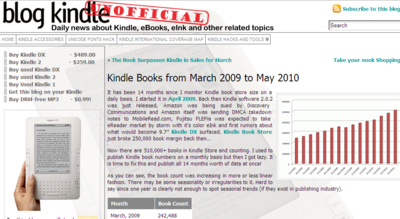 MY REVIEW: There are several blogs that give information about what's available on the Kindle, and various new features that each new operating system brings, etc. This is one of those blogs, which seems to take press releases its been sent and present them as blog posts.

The Economist for Kindle
The Economist is available for $10.49 for a monthly subscription on the Kindle. This is a weekly magazine that is released every Friday on newsstands and wirelessly through the Kindle. The reviews are quite critical of the price, so hopefully there will be some price cuts in the near future.

The Economist is the “premier source for the analysis of world business and current affairs, providing authoritative insight and opinion on international news, world politics, business, finance, science and technology, as well as overviews of cultural trends and regular Special reports on industries and countries.”

James Wilson, a Scottish hat manufacturer, founded The Economist in 1843 to campaign against the British protectionist corn laws. The official name of the publication was: The Economist: A Political, Commercial, Agricultural, & Free-Trade Journal.

In 1845, The Economist went international with part of the sales reaching both Europe and the United States. WT Layton was appointed editor in 1922 and was the considered the main reason why the newspaper remained a success.

In 1935, the publication changed ownership from Wilson Trust to Financial Newspaper Proprietors Limited and a group of individual shareholders who were influential in maintaining the newspaper’s editorial independence.

In 1967, The Economist published a bi-weekly Spanish version of its newspaper in hopes of reaching out to the Latin American population, but did not have much success. This attempt was put to rest in 1970. This project was a good idea, but it could have been targeted for a different geographical location. If this project had reached out to the Latino population in the United States, particularly, the Southwest, it might have been a greater success.

2.6 million people visit Economist.com each month and the website is subscriber only and fee based. Also, visit their website for more information on the history of the publication.

RECENT POSTS:
--The Natural Page
--Foreign Affairs for Kindle
--A not-so-Novel Device from Pandigital
--Business Week for Kindle
--The Nation for Kindle