The Wind Beneath My Wing: Thoughts of an Aviator (Christian inspiration) 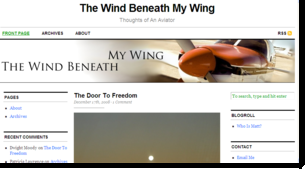 MY RECOMMENDATION: NO, inactive

AMAZON SUBSCRIPTION PAGE: The Wind Beneath My Wing, published by Steve Johnson

BLOG DESCRIPTION: Steve Johnson is a pilot, father, and a Christian. From an airplane high above the earth, he has a unique perspective on the Christian walk and faith. He shares his perspective through stories which can be found here.

MY REVIEW: I'm particularly interested in aviation blogs. Although there are probably hundreds of aviation blogs on the web, only eleven or so are offered - to date - for subscription via the Kindle.

The Wind Beneath My Wing seems to be written by a pretty knowledgeable pilot. The fact that he never missed an opportunity to praise God in his posts might get tiring to those who are non-religous, but religious people will no doubt find his posts inspiring.

Or at least, they would have, except he hasn't posted since December 17, 2009. Having said that, he never did seem to make more than one blog post a month. However, since it's already the end of February, I assume it is now inactive.