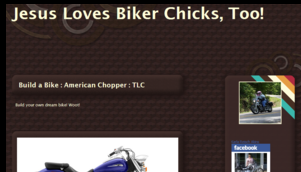 MY RECOMMENDATION: NO. Inactive.

BLOG DESCRIPTION: Biker chicks need Jesus, too! Come ride with me through this fascinating journey called LIFE and see what it's like as a biker chick on the road!

MY REVIEW: Whatever this blog was meant to be in the above description, now it seems to be merely photos of a variety of motorcycles, with a single sentence or two of text. Now, I love motorcycles, so I love this blog. However, because the photos only appear via greyscale, I don't know that it's worth subscribing via Kindle. But, check it out and make up your own mind.

In addition, the blog hasn't been updated since January 25th.

The author, Karla Akins, has a host of other blogs and is also caring for two teenage sons with autism, so it's no surprise she doesn't have a lot of time for this blog. (According to one of the posts on her blogs, she's a middle aged pastor's wife, who loves motorcycles. Hardly a biker chick! More of a biker lady!)

(In addition, Google caused great harm to her on December 31, when they deleted her Gmail account without warning - and since Google is also the owner of YouTube, and Feedburner, and Google docs, to which she had accounts...those disappeared as well. A similar thing happened to me, so I feel this lady's pain. There is no recourse. Google doesn't tell you what you did wrong, so you can't fix it or tell them that they're mistaken - they just delete you and that's it. No appeal. I'd love to start a class action suit against these guys for shutting down people's accounts with no warning and no good reason!

Well, end of rant. To continue my review of this blog:

Check out the blog at its actual link... don't bother with the Kindle.

RECENT ARTICLES:
-Build a Bike: American Chopper: TLC
-This Honda VTX1300R has been my dream bike for a long time now
-I love the look of the 2010 Honda Phantom
-I will not lie. The idea of owning this beautiful beast makes my...
-I will probably end up buying something used...