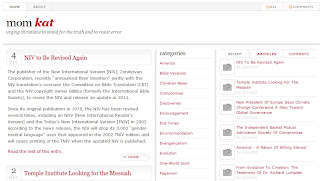 MY REVIEW: Every time I review a blog that has to do with religion (and so far I've only found blogs dealing with sects of the Christian religion) I feel it necessary to point out that I'm not religious. Indeed, truth to tell, after looking around the world as it is today and what it's been in the past, I must say that even if there was a god, I certainly wouldn't worship him. Guy's a loon.

Having said that, MomKat's blog is directed towards those who believe in the King James Version of the Bible, which is her source for her quotations, etc. (And I found it very interesting to learn what the New International Version of the Bible leaves out, to make it palatable! I'm against religion, but I'm also against messing with a religious tome. People should know what it really says, not what its apologists want it to say.) It's also an excellent blog for those who want to know the opinions of such religous folk, even if they are not themselves religious.

She varies her posts between sermons given by pastors, excerpts from books on Christianity, and her own opinions, and certainly seems very familiar with the King James Bible. There's a lot of talk of Satan being responsible for all the woes of the world, and she doesn't like Obama (nor do I, if it comes to that!)