Retro-reviews are reviews from the early days of this blog. 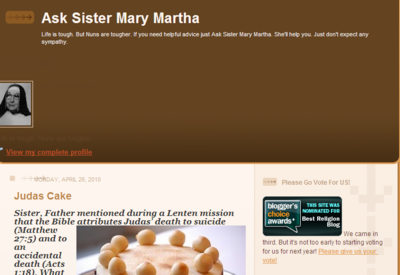 Blog descriptionSister Mary Martha couldn't go door to door to save your soul, so she started a blog to answer life's tough questions. Humor included.

I highly recommend this blog. Very funny. And I’m not Catholic. But I’m familiar with the religion and its tropes. The writer is extremely knowledgeable about the Catholic religion – I assume she really is a nun! – and yes, very funny. So whether you’re Catholic, or agnostic, I think you’ll find this blog worthwhile.

Judas Cake
Sister, Father mentioned during a Lenten mission that the Bible attributes Judas' death to suicide (Matthew 27:5) and to an accidental death (Acts 1:18). What do you make of this? Is there some symbolism there I don't understand?

Why did Father mention it and not say anything further about it? Maybe he did and you dozed off?

Father: The Bible says that Judas hung himself and it also says he fell and his guts split open. Oh well, ha ha! so much for that! Coffee and tea in the lobby, everyone! Rosary at six!

Yes, there are two references that seem to contradict each other as to how Judas died.
Matthew: “and he cast down the pieces of silver in the temple, and departed, and went and hanged himself. And the chief priests took the silver pieces, and said, It is not lawful for to put them into the treasury, because it is the price of blood. And they took counsel, and bought with them the potter’s field, to bury strangers in. Wherefore that field was called, The field of blood, unto this day.”
Acts 1:18-19: “Now this man purchased a field with the reward of iniquity; and falling headlong, he burst asunder in the midst, and all his bowels gushed out. And it was known unto all the dwellers at Jerusalem, insomuch as that field is called in their proper tongue, Aceldama, that is to say, The field of blood.”

I'm sure we could start a collection, as I'm also sure if we dig around, we'll find one or two more.

The first explanation is the most commonly held. In this one, Judas hangs himself and the part about him falling and his guts splitting open refers to what happened after Judas hung himself, which is that hanging there in the hot MidEast sun, the rope broke and his bloated body hit the ground and burst.

Maybe Father didn't want to ruin the cake reception with that image.

One brainiac author went so far as to suggest the actual timeline that caused Judas to drop from the tree. This one purports that it happened during the big earthquake that followed the death of Jesus on the Cross.

The second explanation is a doozie. It seems that the 'ancients' had a different meaning altogether when they said "hung himself". They meant the person would climb onto a rock or a stool and then jump off onto a spike, and then 'hang' there impaled.

The third explanation is my favorite one. This time the whole 'gut spilling' thing is a metaphor that people of the time would have understood and not been the least bit confused. The first passage about hanging is about how Judas died in the flesh and the second is about how Judas died in the spirit. To get your brain around the symbolism, you have to understand that the Jewish people equated compassion with the gut or bowels, the way we equate the heart with feelings of love. Now you have an image of Judas "falling" from God and losing his compassion on a field of blood.

It makes the most sense to me of the three. It would explain why Judas' death would be discussed in such a manner, after the fact, so to speak. I don't think it is a particularly widely accepted explanation.

But my favorite thing about the Bible in general and the New Testament in particular is how every part of it works as both history and metaphor. Heaps and heaps of metaphor.

Like a cake stuffed full of tasty things. Click here to find the recipe for Simnel Cake, an Easter cake representing the eleven apostles who were around to celebrate that day.

--Planning Ahead (Ordinary time is almost at an end. Lent will soon begin)
--Maybe Yes, on the Overreacting (Annoyed that the Bible books are out of order in a lesson plan)
--Kitty Korner (sharing a joke)
--Your Number is Up (is there a patron saint for winning the lottery?)
--Saints Apps (is there a saint for the gut?)